Is spying on your Facebook competitors about to get easier?

Last week Facebook announced via their Newsroom that they’ll be making changes to the platform in order to improve their ‘advertising transparency and authenticity efforts’.

The announcement comes in the wake of claims that advertisers, or more specifically, political parties, were using the platform to push political propaganda, and (the favourite of 2017)… ‘fake news’, to highly targeted audiences in order to (some say, falsely) influence voting decisions. The claims rolled in in the wake of world-stage current affairs events including both US and Russian elections and the Brexit referendum.

Facebook plans to begin displaying ads that are active across all a company’s Facebook properties on a tab on their Facebook Page. So if for example, you had multiple Facebook advert accounts running ads for one of your Facebook Pages, all ads would all be consolidated and shown in a dedicated section, accessible from that one Facebook Page.

This will be done through the introduction of a ‘View Ads’ tab on the page. Facebook shared a preview of this tab in their announcement; 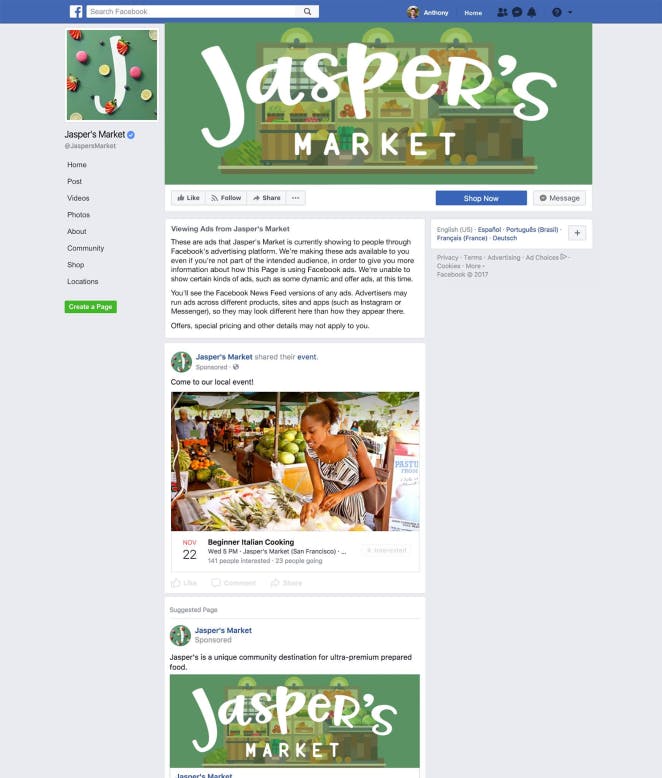 “All Pages will be part of this effort, and we will require that all ads be associated with a Page as part of the ad creation process,” according to the Facebook blog post announcing the change.

For many advertisers, transparency doesn’t need to be a concern. Afterall, the large majority of Facebook advertisers are simply using the platform to share their great products and services with the world.

But when the feature does roll out worldwide, it will be worth considering the messages your brand is sharing with different audiences; the messaging around your products, the images used in your ads, and the discount codes shared will no longer only be available to that laser-targeted audience you so painstakingly built but can be seen by all.

In the update, Facebook also announced that initially the feature will only show active ads, however, the platform plans to begin building an advert archive that will save ads for up to four years (although it was unclear if this would apply to all ads, or only those directly related to electoral processes).

While there are tools already on the market for viewing competitor’s Facebook ads, few are 100% effective and almost all come with a monthly fee. This change in Facebook policy could mark the end of lurking around your competitor’s Facebook page, trying to glean information about their ad strategy. But don’t forget… if they’re aware of this change then they’ll equally be able to see your ads too.

Facebook will first be testing the program in Canada, before rolling it out to the US and then worldwide in 2018. Watch this space.