Is Google poised to shake up recruitment SEO?

Update (2/5/17) – Friday 28th April saw more testing activity from Google that shows they’re testing new job listings that would appear in the SERPs and shake up recruitment SEO, just as we predicted in this article back in February. This tweet, from SEO specialist Dan Shure, gave us a glimpse of what the future for jobs listings might hold:

The image shows jobs listing ads appearing in a ‘jobs pack’ above organic results, pulling existing data from job sites. In a second image, Shure also showed a dedicated ‘jobs’ page that opens up when you click on one of the links.

Needless to say, these changes would cause a big shake up of recruitment SEO if Google presses on with them. Schema will likely become essential to give detailed jobs the best chance of appearing in the jobs pack, and we may see some benefit in the SERPs for using hire.withgoogle.com. We’ll cover any further developments as they happen here on the Impression blog.

A tweet from Aaron Bradley, web channel strategy manager for EA, alerted the world to some potential activity over at Google. In Google’s ‘early access and partner-only’ section, he found a ‘jobs’ tab. There is no further information on the tab, and it can’t even be accessed from the UK, but its presence raises all sorts of questions over what Google could be planning next and what could be in store for recruitment SEO in the future.

Link returns a 404 right now, but this suggests a Google pilot for marking up job listings is coming (likely using #schema.org/JobPosting) pic.twitter.com/de6QxZnkLt

Short term implications
There is no guarantee that anything will come of this jobs tab, and all that we have at the moment is speculation. However, in light of what Google has done in the past, and the schema.org markup that already exists, we can have a reasonable guess as to what Google is considering testing.

Bradley suggested that a ‘Google pilot for marking up job listings is coming’. At its most basic level, this would mean that Google is recognising the existing schema.org markup for jobs posting, allowing more of this information to appear in the SERPs.

If Google were to implement this on a wider scale, we could see search features that are essentially full job listings, displaying data such as job title, salary, and required qualifications, perhaps even in the SERP itself.

It is possible that such a change could level the playing field for smaller companies and recruitment agencies, allowing them to gain ground on bigger aggregators like Monster Jobs in the UK. With the correct markup in place, the site with the best, most relevant content would be likely to achieve greater exposure in the SERPs.

Google’s increasing dominance in the SERPs
If jobs listings on Google were to change in this way, it would be an interesting development for the wider conversation around the dominance that Google has in the SERPs. As with many other search features — think flights, local businesses, and hotels — detailed jobs listings could keep people in the SERPs for longer, reducing the need for them to click through to one of the organic results. This would take away valuable traffic from jobs sites, making their onsite revenue streams less valuable. If job hunters aren’t visiting aggregators as often, the revenue that these sites get from ads and premium listings could go down accordingly.

With traffic threatened, how might recruitment companies respond? The scenario that we are considering would only happen if enough recruiters and job aggregators use the structured markup such that it hit critical mass within the industry.
Why would they do this when faced with the prospect of lower traffic? Because in the short term, it will allow them to keep up with the competition.

Despite a possible drop in traffic, SERP exposure would still be up for grabs, and a company without the correct markup could lose a lot of ground to its competitors in the short term. We imagine that most recruitment companies or job aggregators that are aware of the changes would adopt them, because the risk of losing business to competitors will be too great.

What might recruitment SEO look like in the future?
Looking further down the line, we might see Google taking greater strides into the recruitment sector. It isn’t far fetched to think that Google could look to monetise recruitment, or even create its own ‘Google Jobs’ platform.

Product Listing Ads (PLAs) are one of the reasons that we could conceive of this chain of events. Several years ago, Google used structured data to read product information from ecommerce sites, and place it in organic search features. Nowadays, these product listings are all paid ads like those below, though there’s nothing to indicate this other than a small ‘sponsored’ above the results, and retailers have to input the data themselves. 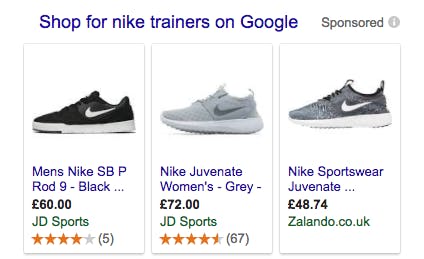 It is not impossible that something similar could happen with job listings down the line, with Google favouring paid job ads in the SERPs. Eventually, it could even be possible to find and apply for jobs entirely within Google, which would be a big blow to the larger aggregators in terms of traffic and, possibly revenue.

However, we’re now deep into the realm of speculation. It is worth thinking about the implications of Google’s testing, but we need to remember that nothing is set in stone yet. Google could quietly drop their jobs testing and it would join the list of many failed tests. But the market is so big and the potential for Google to take a slice of it is so large that we should at least be aware of the possibilities should Google take any more definitive action.

I help clients stand out through on-page optimisation and original, high-quality content. In my spare time, I can usually be found playing a board game or reading a comic.