On the 10th September, Google announced they will be changing the way they handle link attributes from March 2020 as a means of better understanding (and giving value to) the link graph.

There’s loads of information out there for you to digest in detail – I recommend checking out Google’s own blog post on the subject, as well as this handy round up from Cyrus Shepard over at Moz (@Impression dev team, please add “rel=ugc’ to these links. I think… 😉 ).

In summary, the new attributes provide alternatives to rel=nofollow, whereby we can now use:

I’ve taken the following graphic from Cyrus’ post as I believe it sums up the changes really well: 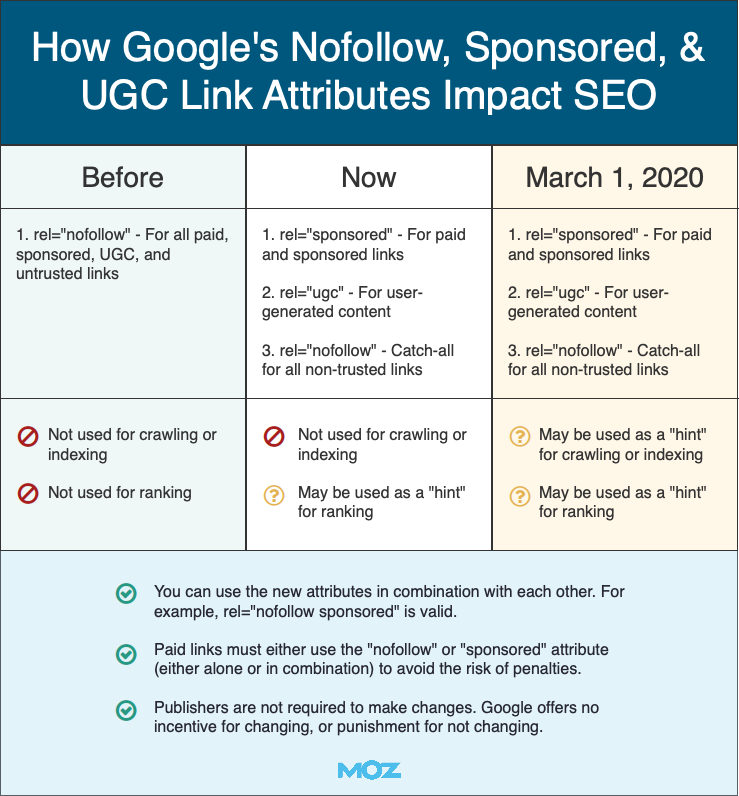 What does this mean for digital PR?

As I mentioned already, there’s plenty of information out there for SEOs more broadly, with the essence of the advice being that you don’t need to do anything yet (unless you’re using nofollow to protect crawl budget, in which case, it’s worth a look).

However, there’s less information (as yet) for link builders and, more specifically, digital PRs. Having read up around Twitter this morning and the various pieces of advice Google has provided, here are my thoughts on how this change will impact link building work.

The SEO industry has, for some time now, been of the opinion that nofollow was not necessarily being used as a directive by Google. Various experiments conducted by the community over the years have shown that links with the rel=”nofollow” attribute were having an effect on rankings and therefore, it seems Google has been using it more as a ‘hint’ for some time.

Which makes perfect sense, when you think about it. The application of nofollow to a link is done by the linking website so it could be seen as a free pass to web publishers to utilise great content without properly crediting its creator.

Now and into next year, these changes will mean that nofollow is officially a suggestion rather than a directive, which means we should see fewer conversations between agencies/clients/teams/stakeholders/the industry at large around the value of nofollow links (they’re potentially still valuable, so we shouldn’t actively ignore/devalue/avoid them).

Nofollow should become less of a concern for journalists

Given that nofollow is officially a hint rather than a directive, I hope that publications who have thus far chosen to apply nofollow to outbound links sitewide will reconsider their options.

Forbes is one of the most famous examples, where every outbound link now carries the rel=”nofollow” attribute, meaning that those of us in the PR industry (and other content creators) feeding and inspiring the articles on Forbes are not receiving full credit. Which is, in my opinion, a real shame (and, no offence to Forbes journos, but pretty poor form in terms of journalism, too – if you’re confident enough in the content to use it in your story, why tell Google you don’t want to endorse its creator?).

That said, I can see why publications like this have chosen to use nofollow, purely for fear of getting it wrong and being punished in some way. But the reality is that the whole link graph is based on the concept of academic citations, which means crediting the creators of content or ideas in full. Application of nofollow to anything other than a paid for link has therefore, in my mind, never made sense.

Now, though, journalists have a choice. If they want, they can still apply nofollow – but it doesn’t mean it will be accepted by Google. For example, if someone is a regular contributor of really high quality content to your site, even if you apply nofollow, the regular inclusion of links to their site will be an indicator of quality, and therefore (from what I understand) mean Google will be more likely to ignore the nofollow and pass value anyway.

What this means for the future of digital PR

In my mind, this move toward a better understanding of the link graph is really positive.

Where previously links stood as a signal of quality and an indicator of which sites deserved prominence in the SERPs, more and more practices have arisen to devalue links – such as comment spam, link farms, paid links and even negative link building.

But the whole premise of links still stands; they’re a reflection of academia, where citations are used to connect academic papers and allow the progression of a discipline through shared information. Imagine a world where Cyrus didn’t get credit for his image that I’ve used above, or where I don’t even use his image because it benefits me more to create my own – it would be a real shame for his content not to be widely shared because it’s awesome, and a waste of my time trying to reproduce it when I can instead do what I’ve done here and extrapolate out from his original insight.

In the same way, then, links will always play and essential role in the web ecosystem. But the way we build those links has got to change, and will continue to do so.