Online Mortgage Advisor is an expert mortgage information website providing an intermediary service, passing customers to the right specialist for them. They regularly share tips and advice and had used SEO techniques to help grow their audience. They approached Impression looking for a content marketing strategy that would enable them to further develop their audience and position their brand as different from their competitors.

Online Mortgage Advisor approached Impression having undertaken some SEO work and knowing that the next step in their search strategy was to improve their domain’s backlink profile for higher ranking positions across core keywords.

At the same time, they recognised the competitive nature of their marketplace meant that, in order to attract and retain visitors, they would need something to differentiate themselves. They challenged Impression to:

This project was broken down into four distinct phases; ideation/research, design, build and promotion.

During the ideation/research stage our content team elaborated on the initial brief by coming up with the idea of comparing UK locations to establish where’s the best place to live. As the concept developed we decided that:

Our research led to us aggregating 19 different datasets across 89 locations (UK cities and London boroughs) which we retrieved from national and government statistics. We were also able to find a way of scraping Zoopla’s large database of property listings.

During the build phase we:

The end result can be seen here: https://www.onlinemortgageadvisor.co.uk/is-the-grass-greener/ 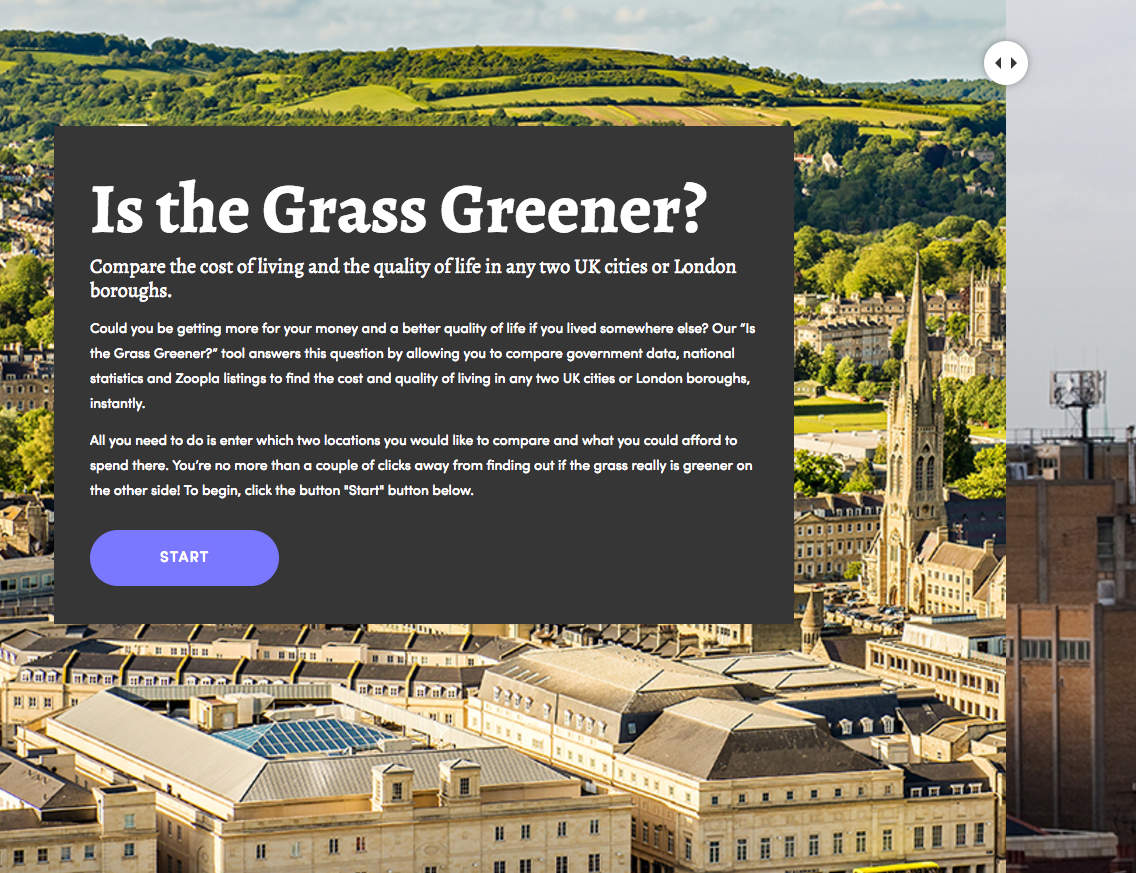 We strengthened the sharability of the tool by carrying out a Google Survey with 2,000 young Londoners (aged 25-34), asking them the following question: “When you come to buy your first home, do you plan to stay in London?”.

More than a third (41%) of respondents said they will buy their first home outside of the capital, with 27% of those citing the city’s cost of living as the main reason. An additional 6% of Londoners said they would move for a better quality of life.

These statistics provided us with a strong data set which we used to create a national press release. We also sourced third-party expert comments, for extra validation, and created an embed code for the “Is The Grass Greener?” tool to encourage wider sharability among the press.

Our PR team also created additional press releases for individual cities including Birmingham, Liverpool, Manchester, Nottingham, Leeds, Brighton, Newcastle and Sheffield, drawing upon the statistics which show these cities to be ‘better’ than London.

Is The Grass Greener (Home)

Is The Grass Greener (Selection)

Is The Grass Greener (Results)

The project resulted in 24 pieces of coverage - 21 including links - from sites including:

The Express article, which can be found here, drove more than 2,276 referral visits back to the microsite, which resulted in a number of enquiry form completions. It also received 117 social engagements.