GreatBeanBags™ is a dedicated Nottingham based textiles manufacturer that has been producing bean bags since 1992. Its focus is on designing and making incomparable quality textile products and bean bags which are sold across the UK and beyond.

GreatBeanBags™ had been working with Impression on technical and content focused SEO for some time, but they knew there were specific keywords that needed an aggressive link building campaign to improve positioning.

The highly competitive nature of their industry and niche meant that they needed a campaign to differentiate their brand whilst also driving links for SEO benefit. Impression was challenged to the following:

The overall project consisted of two campaigns which were split into three phases; ideation and research, design and promotion.

We knew we wanted to produce something different and our content team found a good way to do this whilst also allowing for relevant internal links to ‘kids bean bags’, a core page that was being focused on through onpage optimisation.

Being a local business, we wanted GreatBeanBags™ to reach a local audience as well as gaining valuable backlinks. This is where we decided to engage with a local, UK-exclusive event, the ‘Dinosaurs of China’ exhibition. Dinosaurs of China was a world exclusive exhibition held at Wollaton Hall in 2017. The event showcased rare dinosaur fossils and specimens for the first time in Europe.

The creative concept was to be a children’s competition where kids from around the UK would draw their dream dinosaur to be in with a chance of winning tickets to the exhibition as well as a giant bean bag with their design printed onto it. In total, the piece received over 230 entries from children around the UK, with a large prominence in the Midlands area. 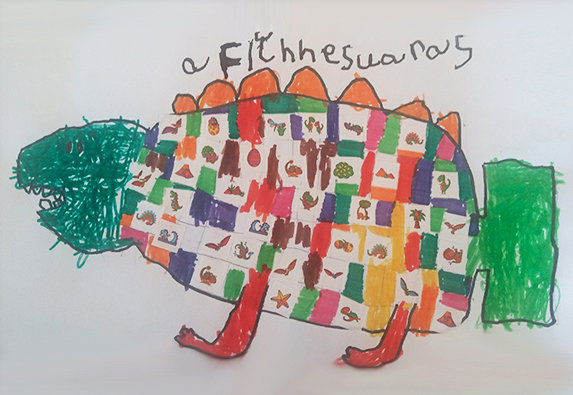 This campaign then developed into its second phase: Kid vs Paleontologist, a more complex and innovative piece. The piece was formed from the following core parts. Firstly, children contributed drawings and descriptions of their imaginary dinosaurs. These drawings were then professionally designed into high-res imagery to bring the kids’ fantasies to life.

Dougal Dixon, a renowned Scottish palaeontologist, author and geologist, then gave scientific commentary and expertise on the children’s dinosaurs on whether they would have survived among other creatures like the T-Rex. 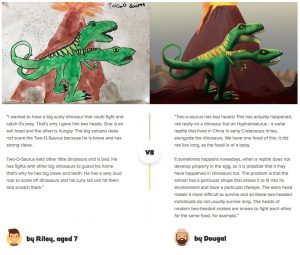 Our next actions were to outreach to the press. The Kid vs Palaeontologist campaign was featured on national and regional online news publications, children and family sites, and was also popular amongst Brazilian and Portuguese online publications. By achieving coverage in such publications, GreatBeanBags™ were able to engage with families and position themselves as a family-friendly brand, whilst also gaining a wide variety of links back to the site.

Another core part of The Dinosaur Campaign was to create user-friendly and visually engaging web pages to showcase the children’s drawings and professional drawings. Whilst being designed to be child friendly through the tone of voice in the copy and imagery, the design of the webpage remained consistent to GreatBeanBags™ branding with the same colours and similar fonts.

The web pages for both phases of the campaign included a shareability function to allow parents and viewers to share it on their social channels. This meant we were able to reach our objectives of further brand awareness and engagement with a key audience.

The Dinosaur Campaign resulted in 35 unique linking domains overall from national and regional online publications such as:

You can see both phases of The Dinosaur Campaign here:
My Dream Dinosaur Competition
Kid vs Paleontologist