How will Article 13 affect YouTube as an advertising platform?

The list of copyrighted content could include; educational videos, music covers, parodies, gaming and of course memes. The official text for Article 13 can be found here, although I won’t blame you if you don’t want to read through endless pages of EU legislation.

With that in mind, here is a more user-friendly summary of Article 13. 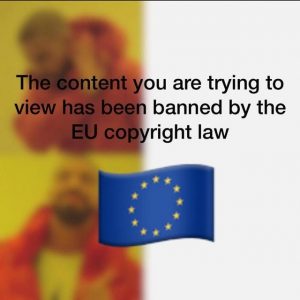 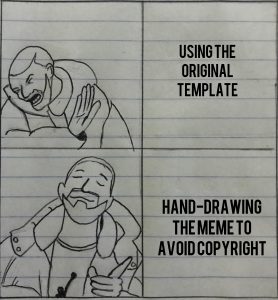 Protecting creativity? That doesn’t sound bad at all…

While Article 13 aims to protect creativity there have been concerns from YouTube over the unintended consequences that would (and I quote) ‘change the web as we know it’. The proposed version of Article 13 would remove any existing copyright systems in place and make social media giants such as YouTube, Facebook, Instagram, Soundcloud, Reddit and Snapchat liable at the moment of upload.

This means that platforms including YouTube would be forced to block existing and newly uploaded videos from the site unless the uploader can prove they own everything in the video (including visuals and sounds).

Who will this affect the most?

Whilst there will be implications for YouTube as an advertising platform (we’ll touch on this later) the YouTube content creators will be hit hard by these changes.

Here are some stats on the estimated impact:

A common misconception is that the digital advertising industry is destroying the creative industry with excessive ads on videos. However, ad-supported content such as music videos on YouTube gives access to those unable to afford a music streaming service whilst the ad revenue made will be injected back into the economy. In the last 12 months, YouTube paid the music industry over €1.5 billion from ad revenue.

How will this affect paid advertising on YouTube? Econ 101

Almost everything in life can be related back to the basic concept of supply and demand, this is no exception. The concept seems intuitive, if the majority of YouTube videos get taken down (let’s use 50% as an arbitrary number) then there is now 50% fewer videos on YouTube for advertisers to compete for ad space. What happens when you limit the supply? The cost goes up.

The same logic applies to paid search, if Google limited the number of keywords that companies could bid on then the cost per clicks would go through the roof. The same applies to YouTube but instead of average cost per clicks, we will be analysing cost per 1,000 impressions (CPM).

Let’s make a couple of some assumptions before jumping into the econ:

The first thing that will happen if the proposed legislation gets turned into law will be a large number of current YouTube videos getting blocked, this forces the supply line to shift to the left. As a result, the supply curve shift shows a new lower level of YouTube videos on the X-axis but also on the Y-axis the CPM has risen to a new equilibrium point (fancy way of saying when the supply and demand curve meet). This new higher level of CPM is a direct result of Article 13 and the decrease in the supply of YouTube videos. 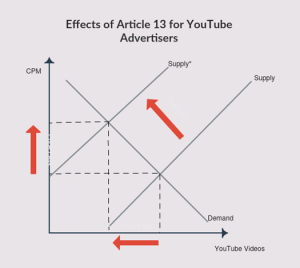 Once the CPM values increase will advertisers continue to advertise through YouTube?

There are a lot of ifs and buts over this question however if YouTube CPM gets massively inflated due to Article 13 then advertisers will have to rethink their strategy and start assigning marketing budget away from YouTube.

The vast majority of YouTube revenue comes through ads and with the risk of a decline in ad revenue raises major red flags for the social media giant. YouTube has created a #SaveYourInternet campaign with the focus of changing Article 13 before it is enforced into law and trying to reach a compromise regarding copyright laws. However, maybe YouTube is really thinking something along the lines of #SaveYouTubesAdRevenue.

Personally, I think that a compromise will be reached between the European Union and YouTube. The current version of Article 13 puts over 100,000 jobs at risk and a potential demise in YouTube ad revenue will essentially limit the earnings a content creator can make on the platform. This begs the question, will Article 13 protect creative content or just severely limit it? Only time will tell on this question but if the current version of Article 13 gets passed then we’ll see some big changes on YouTube. 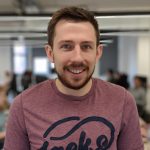 James has specialist knowledge in Ecommerce PPC and Google Shopping.

James has specialist knowledge in Ecommerce PPC and Google Shopping.