The Ultimate Guide To YouTube Video Ad Formats In 2019

In the last few years, video content has been gaining more and more popularity online, not only organically but also within the advertising industry. It’s significantly important for marketers & advertisers to stay up to date with the latest features and updates on video advertising to continuously improve their digital marketing strategy. Considering that YouTube is the second largest search engine, not putting enough or any of the budget into video advertising, might mean that you’re missing out on potential customers.

The numerous amount of ad formats offered by YouTube or Google can help you achieve one of the following marketing goals: awareness, consideration or action. Awareness is for brands that want to reach new consumers by introducing their products or services and showcasing them in front of new audiences. The consideration objective is when the advertiser wants to engage with the customers during the high-intent purchase moments and the action objective is when the advertiser wants customers to take measurable actions like purchases, or form submissions on their business’s website.

The below table displays all of the existing video ad formats assigned to each of the three marketing objectives, and these will be explained further in this article. 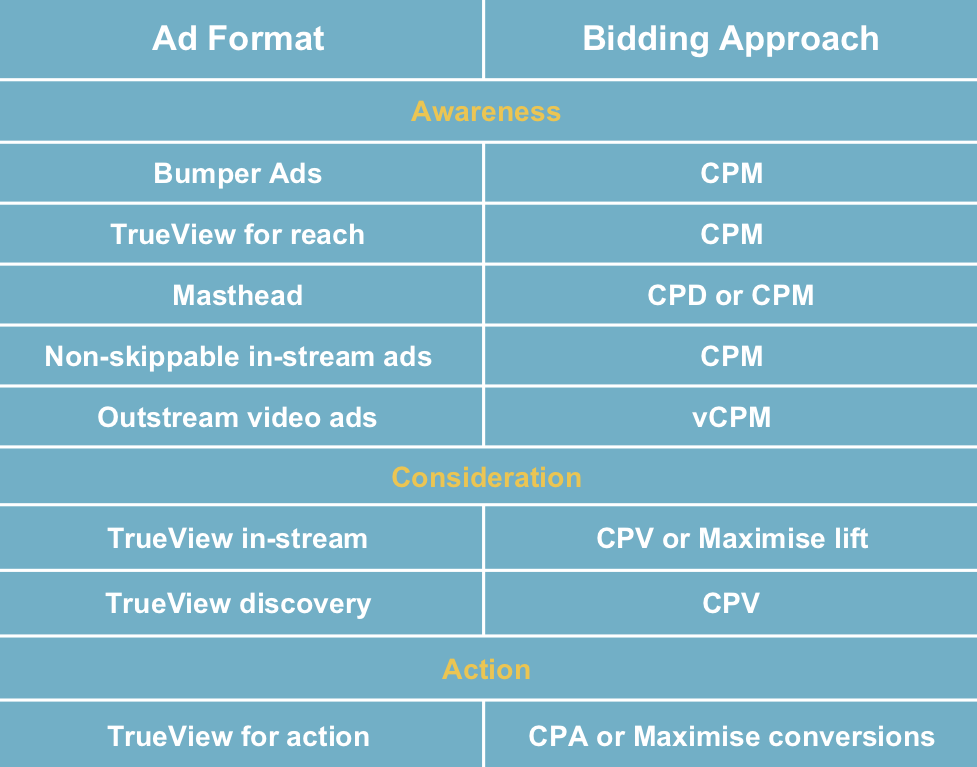 There are 5 variations of ad formats with an aim to drive awareness of a product or service: Bumper ads, TrueView for reach, Non-skippable, Video Masthead & Outstream video ads.

Bumper ads is a very short 6-second video ad format that allows advertisers to build their brand awareness and reach more customers with the use of short but memorable message. Bumper Ads can play before, during or after another video and there is no option to skip them. They can appear on YouTube videos or Google Video Partners and are bought on a CPM (cost-per-thousand-impressions).

Overall, Bumper Ads have the lowest CPM among all in-stream video formats and serve predominantly on mobile devices. They are most suited for advertisers who want broad reach and the lowest CPMs. 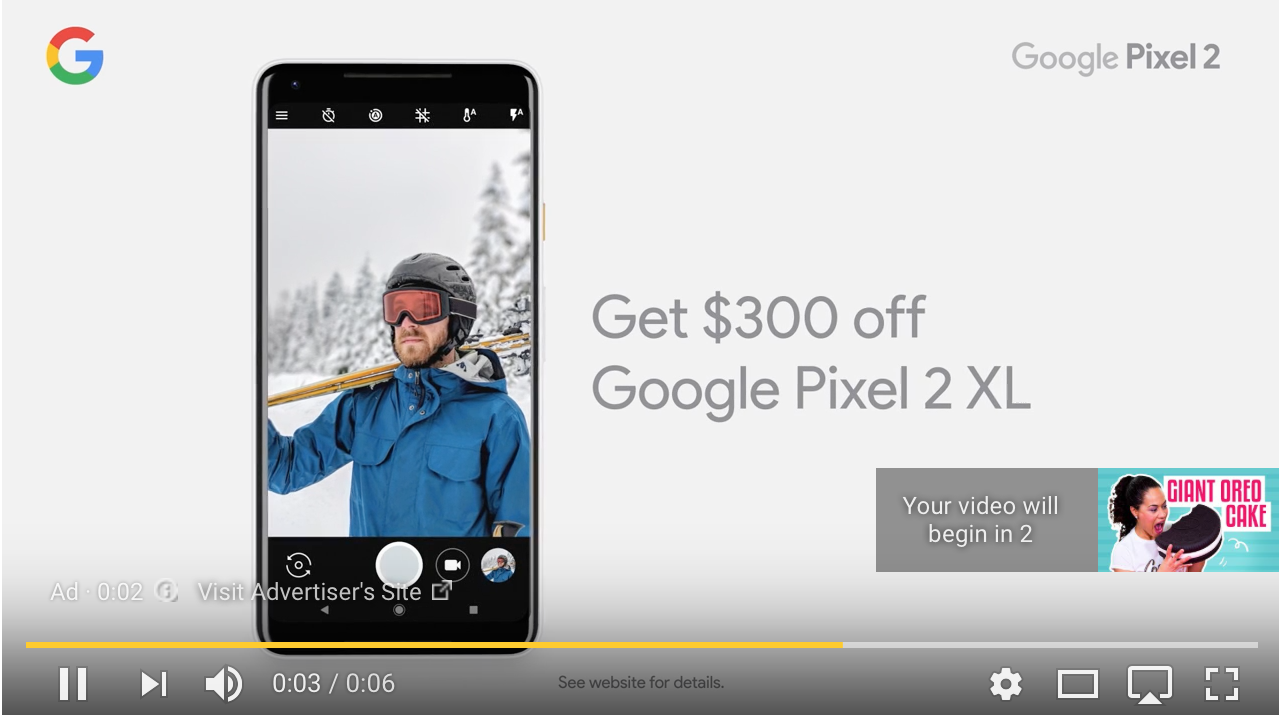 TrueView for reach – there are 4 types of TrueView ad formats and each of them allows you to achieve a different marketing objective. All of them are skippable and in-stream and they allow users to choose to engage with the video. TrueView for reach is bought on target CPM and its’ aim is to drive awareness to broaden the target audience. 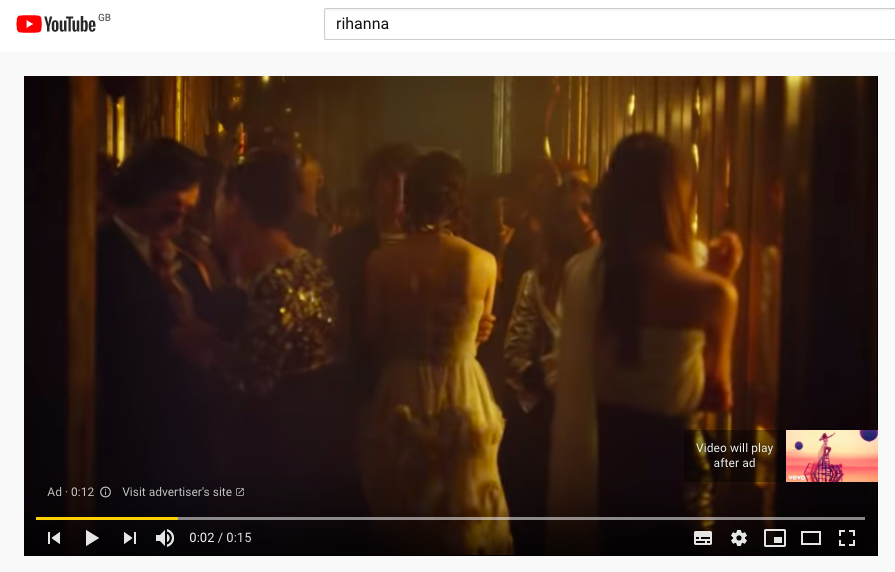 Video Masthead run on the Youtube homepage and home feed and are great for showcasing a brand to a large audience on all devices. They can be bought either on CPD (cost-per-day) or CPM (cost-per-thousand-impressions) depending on the advertiser’s objectives. Cost per day payment allows advertisers to reach a huge audience with a massive single-day reach, whereas CPM means that advertisers can reserve the masthead slot on the home feed of YouTube. The Masthead ad format will work best for advertisers who want to reach a large audience within a short period of time, drive awareness for a new product or service or focus on a high impact placement for greater visibility.

Outstream video ads are mobile-specific ads that aim to reach potential customers on partner sites and apps rather than YouTube platform itself and allow users to choose whether they want to interact with your ad or not. Ads play automatically on mute however, users can unmute them with a simple tap and have an option to either scroll past or dismiss when an ad appears. Outstream ads are bought by CPM which means you only pay for the ad when it’s viewable to the target audience. Ad counts as “viewable” when at least 50% of the ad screen space is visible for at least two seconds.

To drive consideration of your product or service, you can create one of the following video ad formats: TrueView in-stream or TrueView discovery.

TrueView in-stream – another type of a TrueView ad format that optimises for views rather than impressions (like TrueView for reach) however, the ads only count if a video is longer than 11 seconds. These ads are available on YouTube and Google Video Partners and are only charged when someone watches at least 30 seconds of the ad or takes a desired action from the video (for example clicks the call-to-action to visit the landing page). They can be played on both desktop or mobile devices. TrueView in-stream ads are bought on CPV (cost-per-view) or Maximise Lift bidding strategy. If your goal from YouTube ad is the view counts, Google recommends to create a video that’s at least 12 seconds long but not longer than 3 minutes. Any video shorter than 10 seconds, won’t even be tracked by YouTube analytics, so keep that in mind when creating TrueView in-stream ads.

A TrueView for action is the only video ad format with a marketing objective to drive action (this can be purchasing your product or service or driving lead forms).

TrueViewfor action are skippable in-stream ads that allow you to catch users attention and turn it into website actions. They are bought on CPA (cost-per-action) & Maximise conversions and are available on both YouTube & Google Video Partners. The key feature of TrueView for action ads is that they include a customisable call-to-action throughout the whole ad to drive clicks and website actions. At the completion of the ad, they automatically show an end screen promoting the call-to-action for more than 5 seconds.

TrueView for action ads are ideal for advertisers who have the conversion tracking in place, are looking to optimise their video campaigns to achieve website actions such as purchases or clicks and want to leverage the power of video combined with Google’s automated bidding strategy. 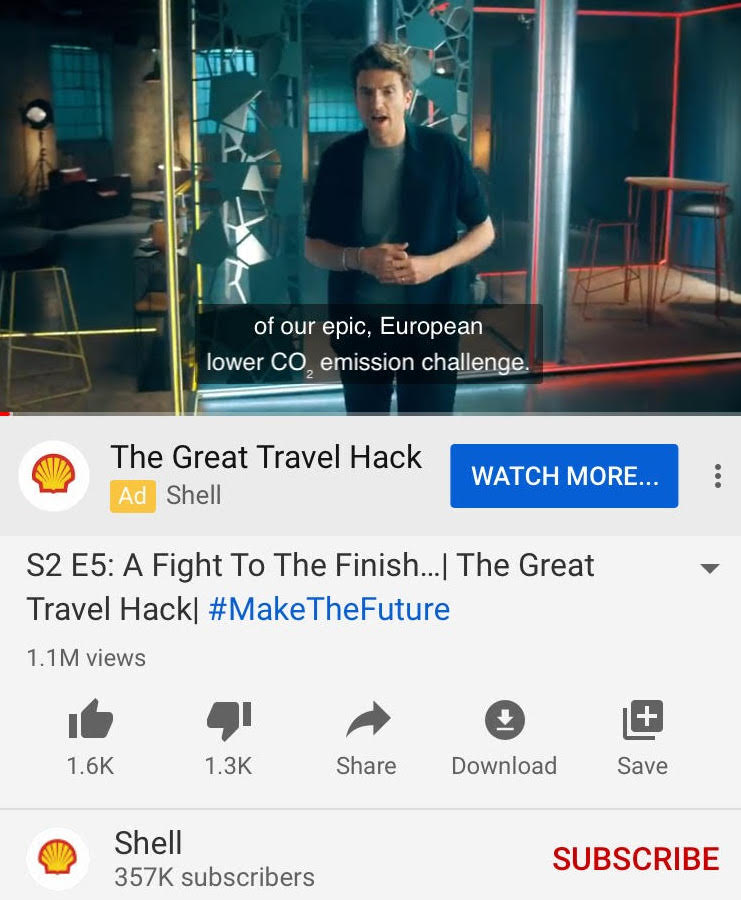