The year is 2020 and the battle of streaming platforms is well and truly happening. Netflix and Amazon Prime have been going toe to toe for the past couple of years, and with the introduction of Disney+, people across the world need to make a decision in which platforms to invest to get their dose of movies and TV shows. I have decided to get my SEO hat on to understand how streaming platforms compete in organic and if it’s a channel worth investing in.

Available On Knowledge Panel – Amazon, Where are ya!?

I’m a customer of both Netflix and Amazon Prime (big flex) but commonly refer to Google to understand where a movie/TV show is available. In 2017, Google introduced a knowledge panel to showcase streaming options and it’s quite common to be served across most movies/tv-shows. 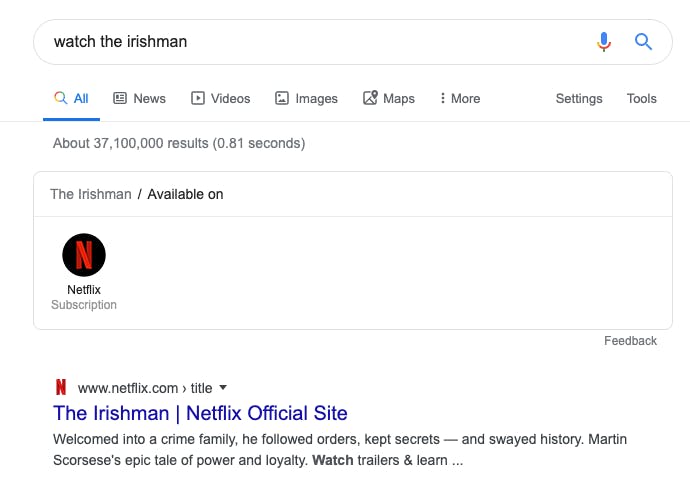 Youtube and Google Play also display for certain movies/series which allows both subscription and purchase options to be included within this knowledge panel.

From researching certain titles, I noticed Amazon Prime never had their subscription or purchase offering within this knowledge panel. The Expanse is a popular Sci-Fi TV show on Amazon Prime with 103,000 searches per month in the UK. In the screenshot below, you can actually see Amazon bidding on this search with no offering in the knowledge panel, they own a lot of real estate on this particular title but surely you want to maximise on every option (if it’s available) 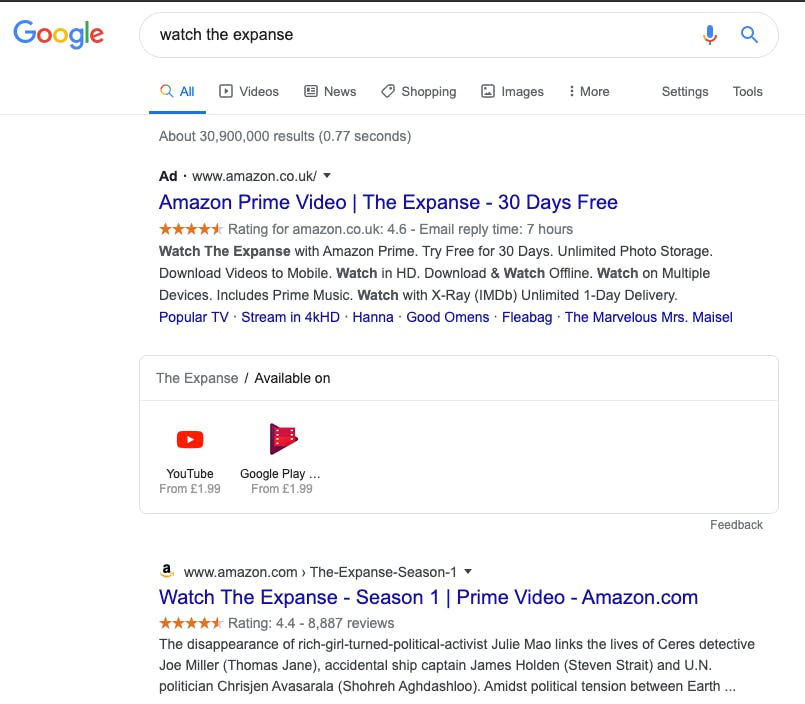 On September 27, South Park arrived on both streaming platforms, however, Amazon Prime owns seasons 1 to 23 with Netflix only having season 1, 19, 20, 21 along with “Top episodes” which lead to Amazon Prime trolling them on social media. There are 37,000 searches for “watch south park online” in the UK and that’s not including the long tail search. Now let’s see how both platforms compete in organic search… 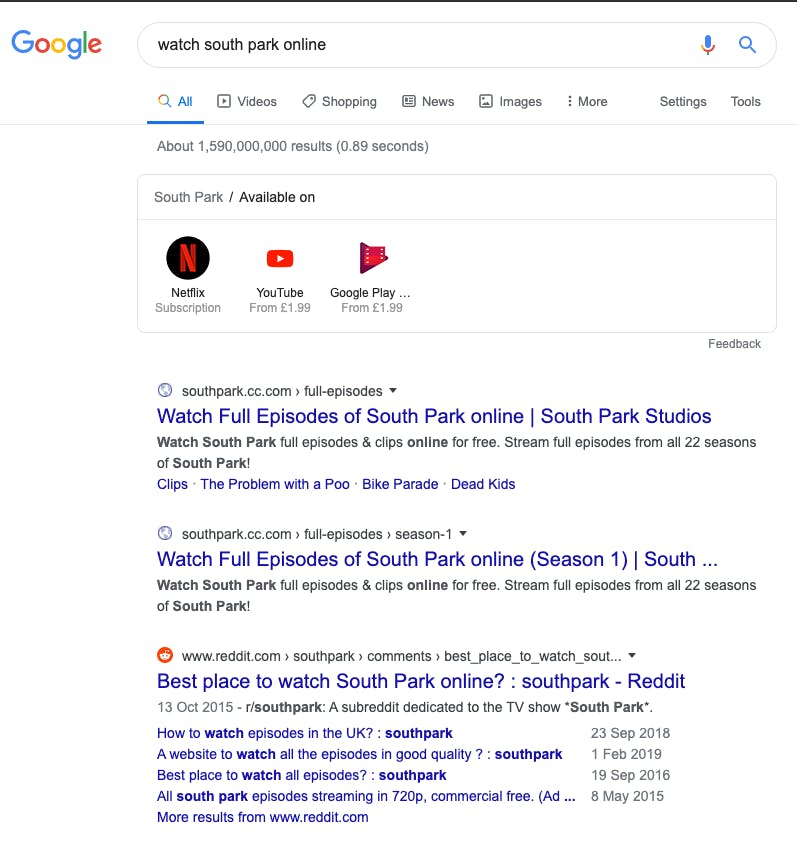 Once again, Netflix, Youtube and Google Play are featured within the knowledge panel with Amazon nowhere to be seen. Surely they want to have visibility on a title in which they own the best offering?! I decided to investigate why this is the case… 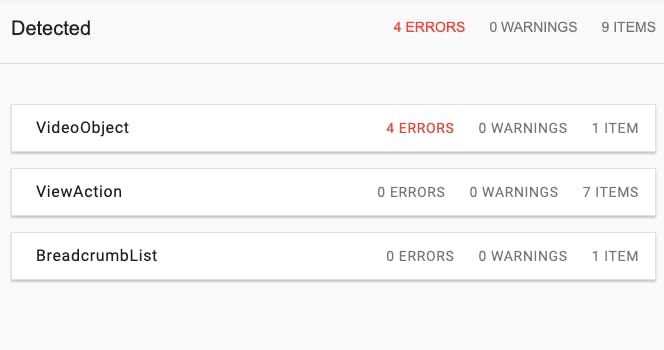 Amazon Prime doesn’t have an indexable title overview, however, they appear to canonicalise the onsite promoted title overview URL to season 22. Despite this, all the seasons have indexable URLs. I have decided to check out both season 1 and season 22 which both are indexed in Google Search:

We can now see these URLs have TVSeason schema applied, however, I noticed the URL included in the mark up was different to the URL that I was analysing: 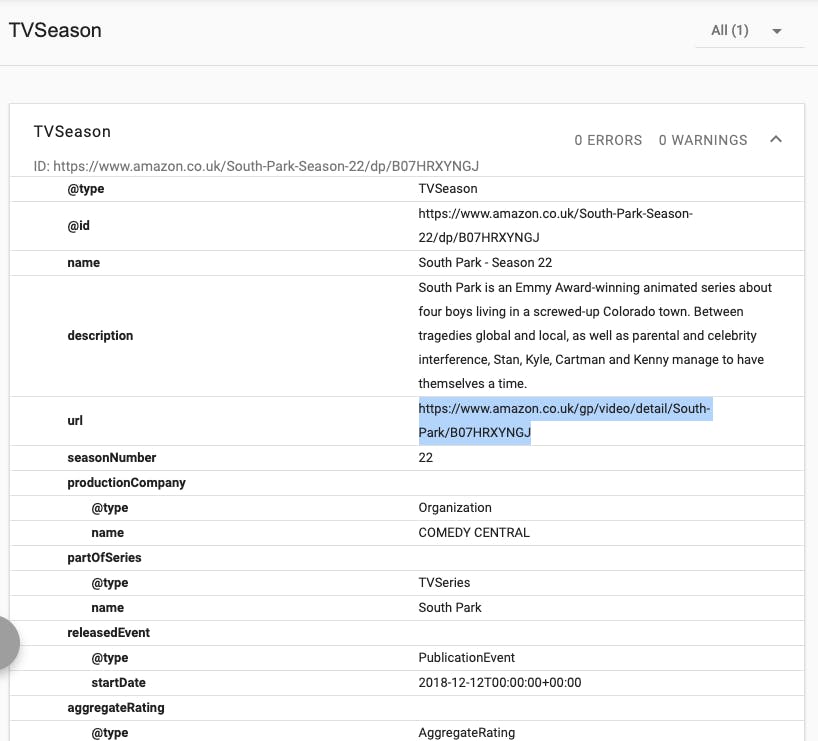 It turns out the URL they are supplying through the structured data is not indexed in Google because it’s canonicalised  towards the season 22 page:

Interestingly, this /gp/video/ path was once indexable and can still be found in Google’s index but there’s clearly been an attempt to migrate the pages over to new URLs (similar to the South Park ones found above). 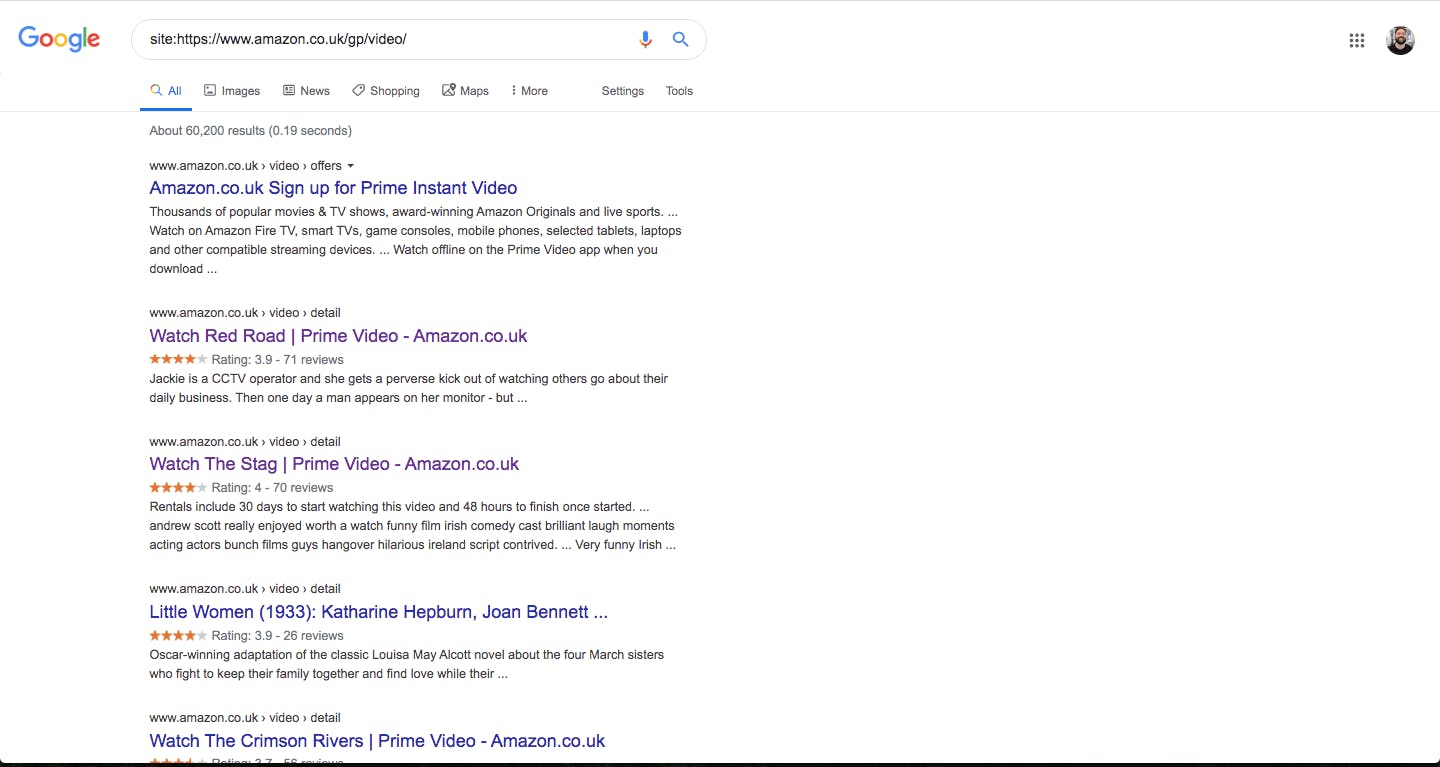 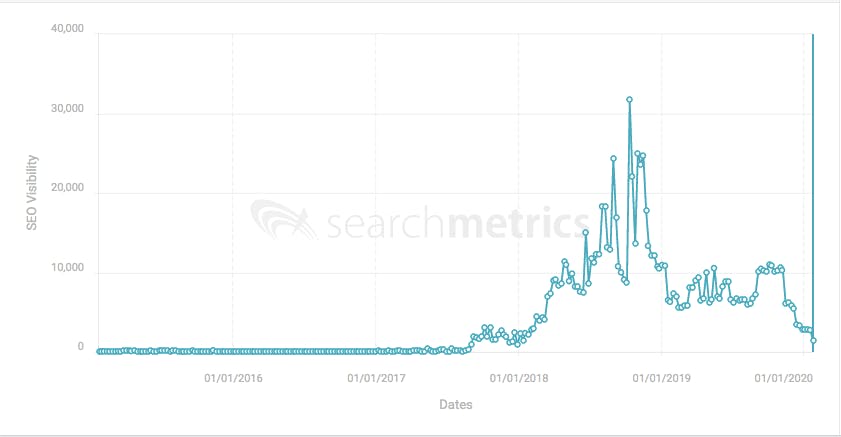 By reviewing this, I believe there are two likely scenarios as to why Amazon isn’t displaying in the knowledge panel.

Number 1 – Non-Indexable URL being supplied through the structured data

I believe this may be the most obvious reason, however, because it’s not a no-index tag but a canonical should value being supplied towards the season URL?

This post is created purely out of my own SEO interest, but that being said, there are huge amounts of volume in [watch/stream] keywords within organic search and being able to adopt a highly visible spot at the top SERPs could make a huge difference for these platforms, especially if done at scale across all available titles.

This issue and growth opportunity isn’t unique to Amazon. I have also reviewed streaming platforms which share titles with Netflix, such as BBC iPlayer, which don’t have structured data across its titles which could potentially allow this type of visibility in Google Search.

If structured data is the issue in this case, as a new or existing streaming platform, ensuring your structured data is correct could lead to huge visibility and organic traffic from Google. I hope Disney + are reading! And Amazon, if updating this works…..cut the cheque.