Jeff Ferguson has been working in search for over 20 years, and for the last 6 years has been running his own agency. He (quite sweetly) brought along his mum for his presentation (great Christmas gift!).

Social has no influence on search rankings.

Jeff says there have been studies through the years which have suggested a correlation, but in 2010, Matt Cutts came out and said that social has no influence.

Fast forward to December that year, and he said that they might be testing social signals… but by mid 2011, Cutts debunked another myth that Facebook Likes don’t affect search rankings.

In 2013, Moz came out with a tonne of data and showed that Google Plus 1s had a connection with search rankings – and almost immediately, Matt Cutts came out and say nope, that’s not the way that works. Everyone was pretty peeved. 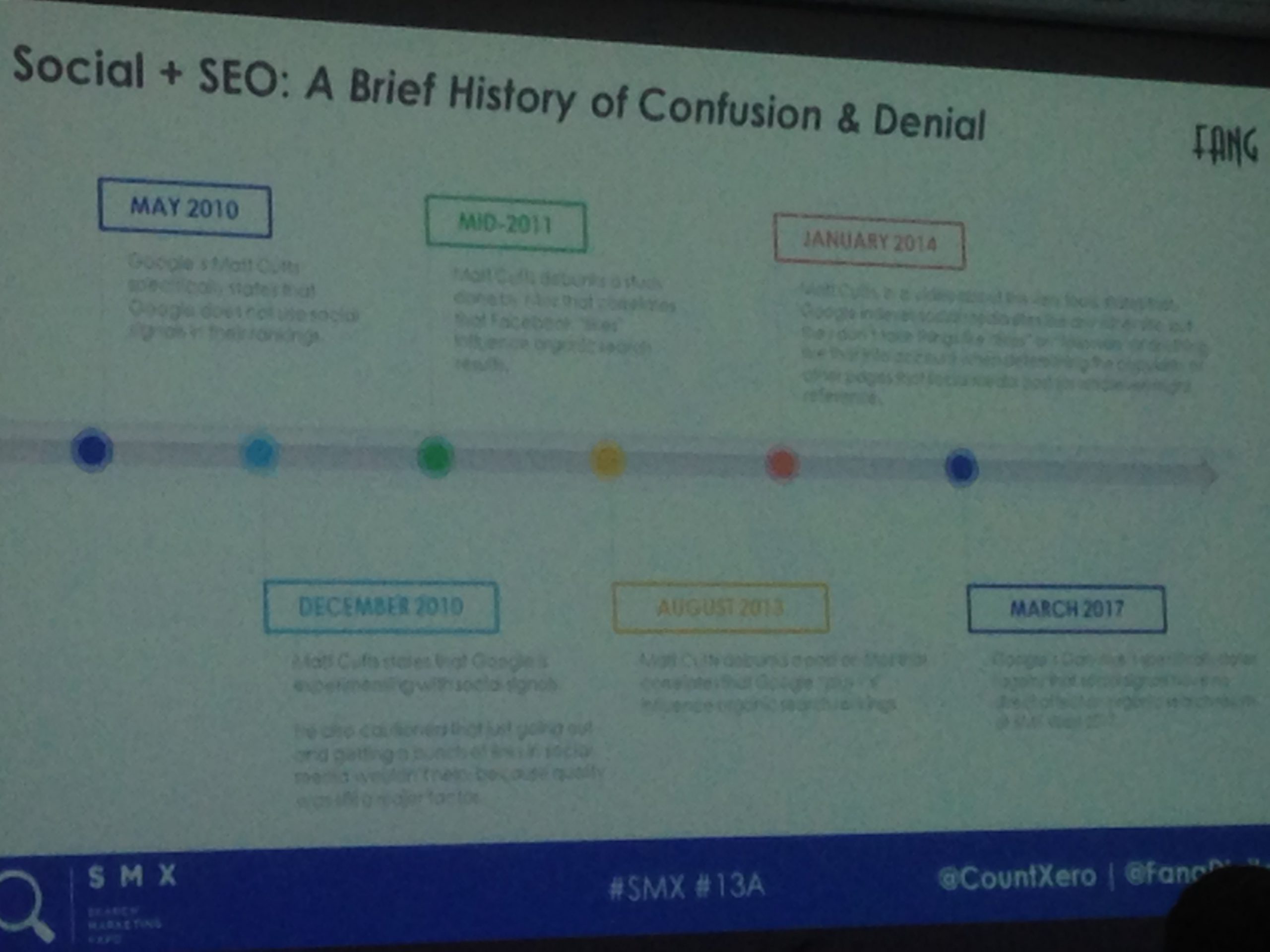 In January 2014, Matt Cutts came out with a video that states that Google indexed social media sites like any other, but that social doesn’t influence rankings. The correlation comes from the fact that great content is great content, so it tends to move well on social as well as other channels.

Then, in March 2017, Danny Sullivan asked if Google uses social signals. Gary Ilyes (new Matt Cutts) said no, they did once, but not now.

Jeff said he was therefore surprised by the people who do come out and say that social signals do have an influence on rankings. He described them like dogs, coming out as a pack to attack anyone who says they don’t.

We’re being lazy when we do that. There’s no connection between social media and rankings. Stop it.

Social and SEO: a match made in heaven

We should allow social to inform our content strategies.

Look at Almighty Press, says Jeff – could be used for link building, but he prefers it for inspiration. Look at Twitter and Facebook too. As Matt Cutts once said, social networks are crawled like any other page, so look at what’s popular and be inspired by it.

Buzzfeed came out and said that they are platform-agnostic. They don’t care where their content lives – on site, on social – they are in the content business and they are going to get that content enjoyed no matter where it is.

Search for General Electric in the States and the whole page is taken up by their brand – with their website and their social channels. Optimise your social channels and you can take up more real estate in the SERPs too.

Social media for discovery and relationships

Social is great for helping people discover your content. By posting it on social channels, you can get more people to see it, so it helps drive traffic.

Link building, if we think about it, is a lot like PR; to get the coverage, we need to build those relationships. While we struggle to get into their editorial inboxes, we can use social media to build relationships with journos and publishers to support our link building efforts.