In this session, we heard from Nick Wilsdon, SEO lead at Vodafone, who talked about SEO in a mobile first world.

Google has kind of forgotten about local for a while; local SEO has been a bit neglected of late and mobile really grows the importance of it.

Vodafone did some experiments themselves. They simply tidied up the listing, added some new images and saw a 30% increase in conversions through that store.

Local store schema can be added via GTM to speed up the process; Vodafone prefers JSON-LD. Nick recognises that there can be a lot of issues with adding schema, so Tag Manager is invaluable and schema markup an easy win.

Photography is also really important – but not necessarily the quality! Vodafone found that 360 degree photography worked really well for them.

Vodafone has been reviewing the way they think about apps, linking through to functionality rather than telling people to just download it. So, for example, topping up their phones, they now send people to do that within the app, rather than just getting them to download the app.

Nick recommends Firebase as a way of improving app journeys and reducing friction.

Nick doesn’t like the idea of giving this much control to Google and recognises the reasons not to. But, as with everything Google, there is an upside, so Vodafone are using AMP.

They use it across their ecommerce pages, and have seen huge gains in terms of mobile search traffic and mobile conversions. There’s a huge amount of support for AMP, so Nick suggests checking out the Yoast AMP plugin for WordPress.

But, AMP isn’t a silver bullet for performance. Performance goes way deeper than that. 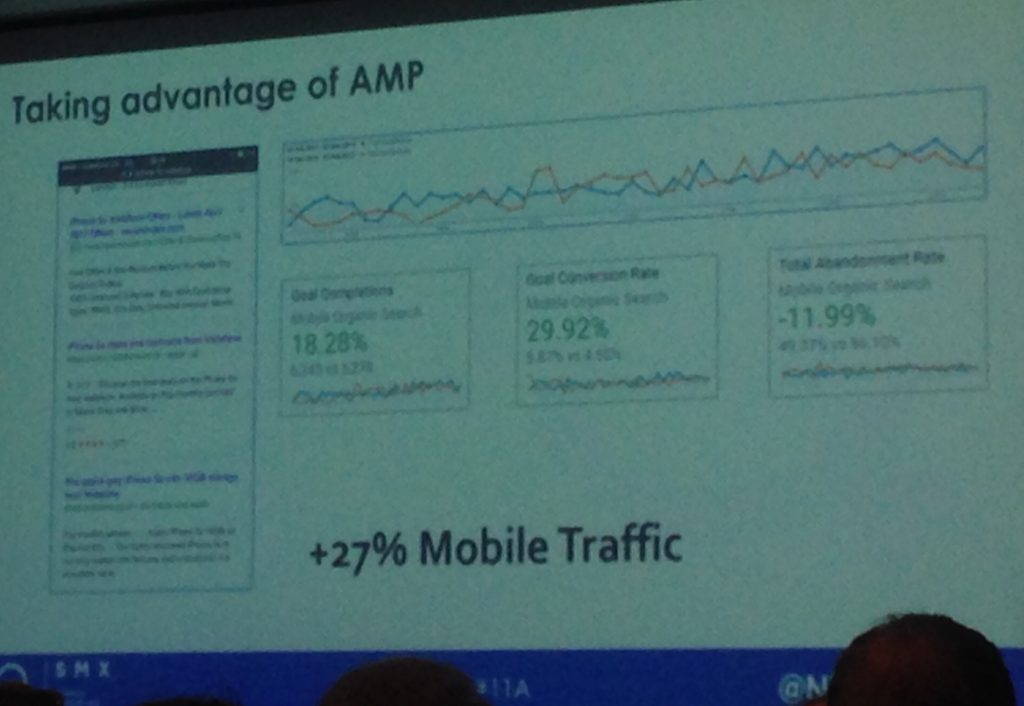 Best practice needs to be installed throughout the business. HTTPS, HTTP2 deployment are important. (Note: if you’re using HTTPS but not HTTP2, your website will be slower).

Make sure you focus on improving customer experience beyond AMP, don’t just rely on AMP.

When asked about the sentiment expressed in a forthcoming Brighton SEO talk that suggests making websites faster rather than focusing on AMP, Nick agrees that fast websites is the goal, but that an AMP-first approach can help you plan what you need, but have a wider plan than just AMP.

Head of Digital PR at Impression working with colleagues and clients to deliver link acquisition campaigns that support SEO visibility and wider marketing goals. Regular speaker at industry conferences and contributor to industry publications. In my spare time, I jump out of planes.

One thought on “SMXLondon: SEO in a Mobile-First World – Nick Wilsdon”

Head of Digital PR at Impression working with colleagues and clients to deliver link acquisition campaigns that support SEO visibility and wider marketing goals. Regular speaker at industry conferences and contributor to industry publications. In my spare time, I jump out of planes.