The last session before lunch at OutREACH 2018 was a panel discussion where top tips for digital PRs were shared. Here’s our write up of all their top tips.

Have you ever tested a story before you go ahead?

Aira: Yes, absolutely. You should always try to test your ideas where you can. Build relationships with journalists, and by taking the time to contact them and seek their opinion, you build better relationships.

Kaizen: I’d say as well as journalists, if you don’t have that relationship, another way to test things is Reddit. We use this if it’s a piece of content we’re not sure about. You’ve literally got thousands of people on there waiting all day to give you feedback whether you like it or not, so if we are going to put something on Reddit we do it at the stage when it’s ready but not live yet so we can make changes.

Verve: We use Reddit too. It’s also worth saying to journalists if they’ve taken something similar to your next project that you’ve got something coming up. Once you’ve got that dialogue started, it’s worth pitching as long as the stars align and it makes sense to do so.

Have you ever offered journalists an exclusive and what does that even mean?

Verve: Yeah, a journalist actually said to me once that there’s no such thing as an exclusive these days because it’s the internet and everything’s out there. I tend to pitch to top tier targets first and I’ll keep it that way for a day or two but then I have to move on and if they miss it they miss it, you can’t wait around forever.

Kaizen: Same here, you offer it to top tier and say maybe they have a day or two days, and follow up, then if they don’t take it so be it, you move on. Another way is to offer regional exclusives, which is a slightly different way of thinking about it.

Aira: In terms of a top tip, when it comes to securing an exclusive, whenever we’re onboarding a new client we will always ask them what their top golden target publications are, and then we can prioritise those as it means that 1) you have a very happy client and 2) you can get the ball rolling with some features to start.

You’ve gone to a journalist with a specific piece and they’re obviously interested because they’ve emailed you back – but then they ask ‘has this been covered much elsewhere?’. How do you respond?

Aira: You have to be as transparent as possible. If you lie, you will burn bridges and they’ll probably never reply to another email because they can’t trust you. If it’s content that is already out there, perhaps you can get a key spokesperson or something to add something new and bolster their story.

Kaizen: I’m always wondering if they’re asking me because they want to know if it’s popular or because it’s been covered already, but we’d also try to give them something extra for a bit of exclusivity.

Verve: You could say ‘not this exact angle’ or say this specific angle hasn’t been covered, but yes you don’t want to lie.

Are there any downsides to going to journalists before something is live?

Verve: Inevitably you’re relying on things going right, so you can pitch it during the testing phase but you need to know that it’s going to go live when you say, so you can’t offer it to a journalist and then have to tell them something’s delayed it going live.

Kaizen: I have a blanket ‘never’ rule on this. The only exception to selling something before it’s live is in that situation where you’re already in communication with the journalist and they’ve just published something else you’ve done and you say ‘I’ve got something else coming up that you might like’. But apart from that, I just feel there’s too much that can go wrong.

Aira: I agree with Bobbi, you have to be really really really careful, embargos even still risk things going wrong. If you’re pitching in a story and you can trust the journalist you might let them know, but we tend to do more ‘warming up’ where we know a journalist will definitely be interested and we let them know it’s coming.

Aira: So we’ve all been there, everyone in the room has written a really good email and a really bad email. We launched a piece of content called Bezos’ Billions earlier this year which compares Jeff Bezos and his wealth to other country’s GDPs. We took a very staggered approach to this launch because we knew it was risky content for our client.

When the Forbes rich list came out, we were able to use that to our advantage. We emailed places including USA Today (we included emojis in the subject line to stand out) and we included plenty of information and made it look really eye catching with bold and big numbers and a screenshot that they could use. 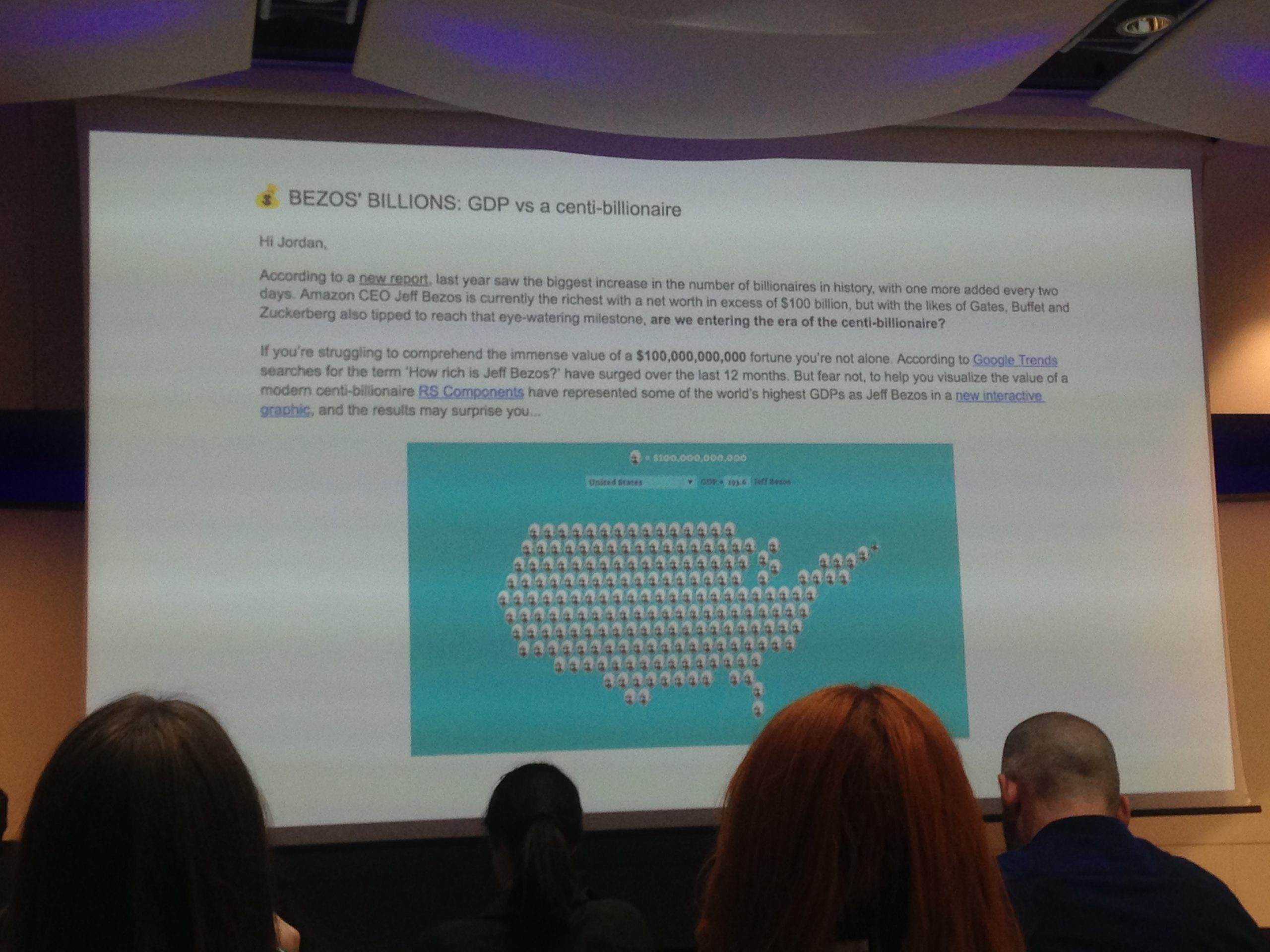 We were really lucky that this email worked so well because when we got that coverage on USA Today it was a tipping point and we got a further 60+ links as a result.

On the flip side, we had a piece of content which looked at the likelihood of events happening vs other events. Our email was so long and cluttered and the story got lost: 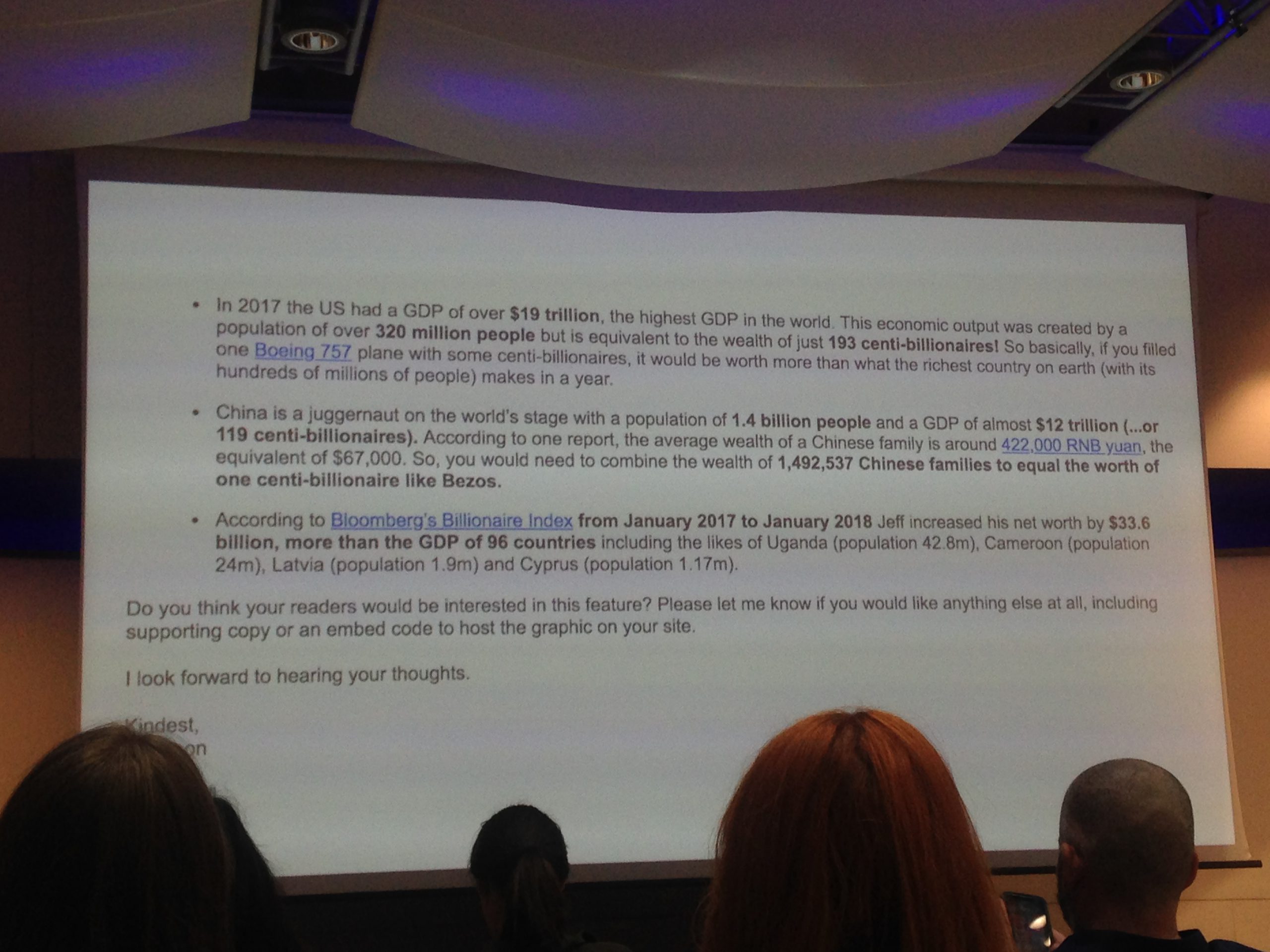 Verve: My best email was one which got straight to the point. I bolded the part which was the clear headline for the story, so it was giving that clear signal to the journalist. I gave them the link to the piece and a gif of it (which we compressed so it wasn’t too heavy).

I could also have given them a link to the Google Doc where they could have accessed quotes from the client. The real aim is to have it so they can just take the email straight away without any back and forth. The amount of time journalists write something without ever getting back to you is astounding. 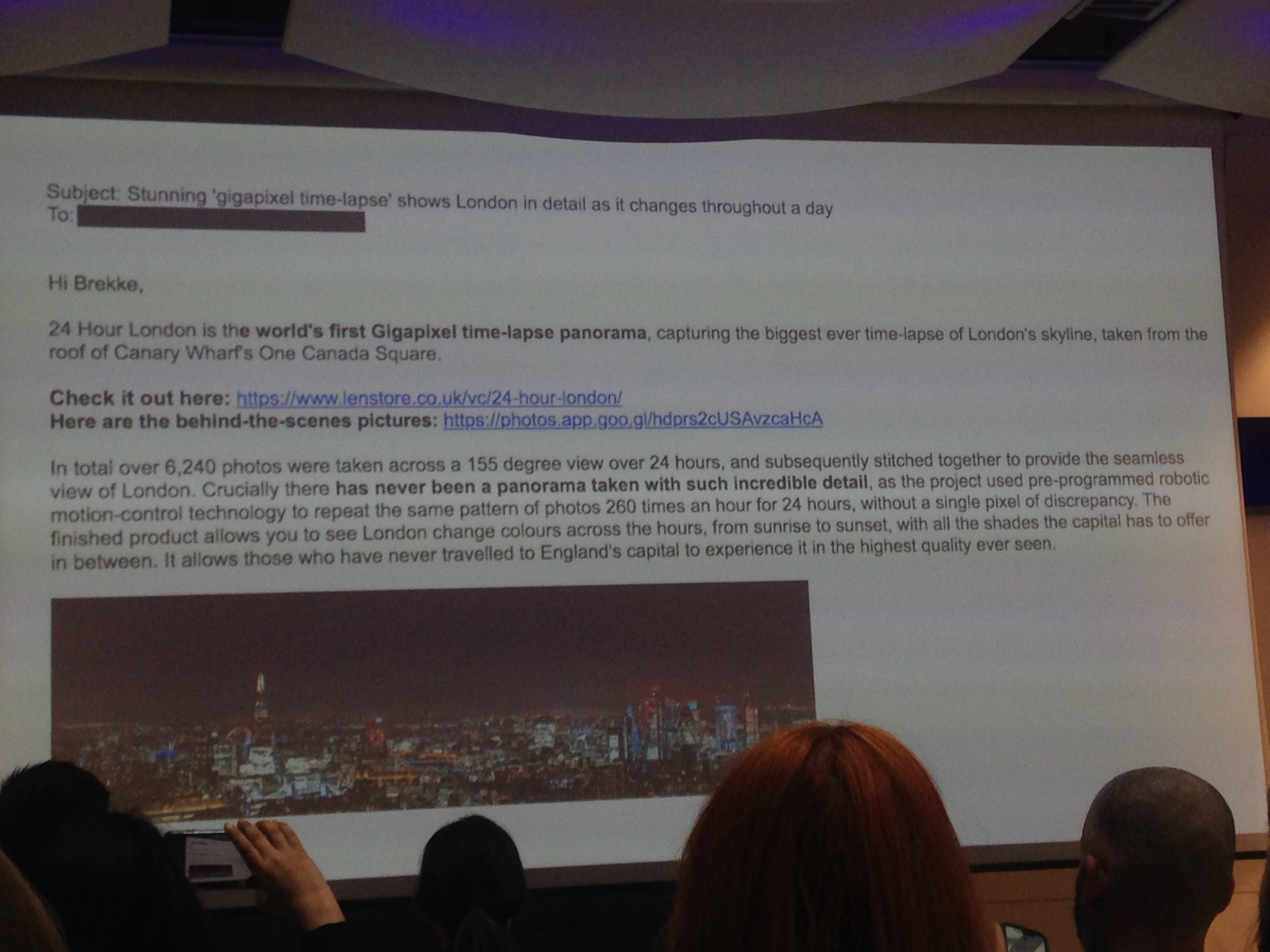 Kaizen: We did this piece about female esports champions for a betting company. The best email we did had a pretty controversial first line to grab their attention. We also included bullet points to tell them what they can expect to get when they click the link. We also included a hard hitting stat.

We had some really really nice feedback to this and people were really happy to cover the angle. 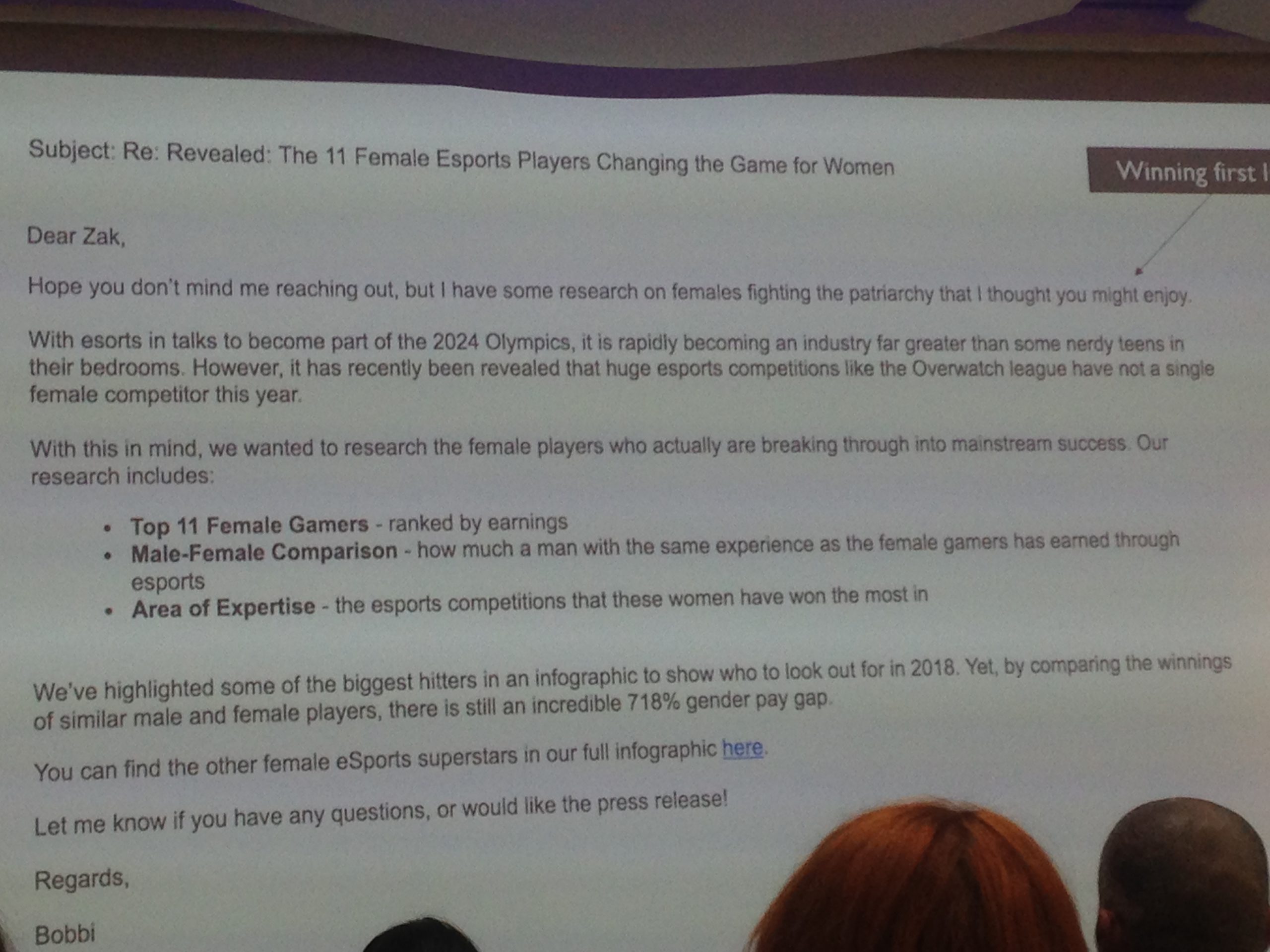 We also did this piece for Crystal Ski which helped people find the best ski resort for them. That was a bad email because it seemed to be either an ad for a resort or even a partnership where we’d pay for them to go skiing, which is not what it was at all. Always check your subject lines to make it clear it’s news you’re offering and not a free holiday.

Do you treat nofollow links differently?

Verve: We try to prioritise those which give followed links where possible.

Kaizen: Yes, to an extent, we will prioritise those which are followed and have SEO value, but then if we know we could get snowball traction off the back of a no followed link we will go for it.

Aira: Links are the aim of the game, right? We always try to prioritise links. We have set up exclusives in the past with places that give no follow links but as Bobbi said, we do go for those which can give us snowball links as a result of that high authority coverage. We try to get links because that’s what we’re paid to do, but we do recognise the value of no follow can still be there too.