Mobile algorithm update: an analysis of the impact so far

Google’s mobile algorithm update went live this week. Long anticipated by the digital marketing industry, the update essentially devalues non-mobile-friendly websites in favour of those which are mobile-friendly for users searching on a mobile device so, unsurprisingly, many businesses are asking what the impact will be for their website traffic

The update went live US time on 21st April (which means it went live that evening in the UK). We’ve gathered the Analytics data of 23 of our clients this morning (allowing us to include data from the 22nd April and therefore ensure we cover the algorithm update going live in the UK) to identify trends and changes we’ve seen. Here’s our initial analysis of the impact of the mobile algorithm update for business websites.

Method: Navigate to ‘channels’ report on Analytics and select ‘organic’. Change the segment from ‘all sessions’ to ‘mobile traffic’. Set the date for 24/3/15 and then for 22/4/15.

By comparing the number of mobile visitors to each website on the 24th March 2015 and the 22nd April 2015 (so comparing a Tuesday to a Tuesday), we have calculated the percentage change in visits in light of the algorithm update.

We captured the total number of organic mobile visits across all 23 clients on the 24/3 and 22/4, then calculated the percentage change between those two numbers to find the average change between the two dates. Our data shows a 7.21% decrease in mobile visits between the two dates overall, indicating that the algorithm may have had an effect across our clients’ mobile traffic (where we’ve done everything we can to reduce all other mitigating factors). 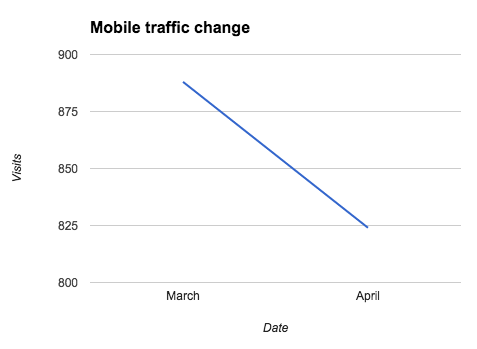 Note that the numbers here are not big (mobile not being a huge traffic driver for these clients anyway, hence their lack of investment in a responsive site so far) but the trend is nonetheless interesting; sites which experienced a decrease lost between 1 and 67 visits, whilst those who saw an increase benefitted between seven and 40 visits. Where a decrease happens, the impact is larger than the opposing uplift.

The greatest impact was seen by a client we have in the travel industry. Here, the percentage decrease of 68% between the two dates represented a drop of 67 visits; again, we’re not talking big numbers here but given the mobile usage trend of this industry, we’re not surprised to see this relatively large decrease. As more people browse for leisure activities on their mobile phones, the travel industry will no doubt be one where there are clear winners and losers, where the winners take advantage of mobile technologies and the losers fail to meet even the basic requirements of Google’s ‘yes/no’ approach to mobile usability.

The clients we analysed covered nine industries and there was no other clear trend. It’s worth noting that there will be industries which are more heavily impacted by the algorithm update because they have a higher tendency for mobile visits anyway.

Tablet traffic: were tablets affected by the update?

We were also interested to see the impact of Google’s latest update on tablet traffic. While Google itself has described a clear differentiation between mobile and tablet, with the indication being that tablets are more like desktops than mobiles, the more recent introduction of the ‘mobile and tablet’ report in Analytics suggests a move toward integrating the two much more closely (especially with the rise of ‘phablets’ blurring the lines further). We wanted to see if tablet traffic had indeed been impacted by the update.

We analysed the same 23 clients using the method described above but changing the segment to ‘tablet’ rather than ‘mobile’. We found that the net difference was a decrease of 1.16% between the two dates, indicating very little impact from the update on tablets, if any, the largest decrease being 26 visits and more accounts seeing an increase or stagnation in tablet traffic.

We tracked the mobile rankings of a number of our clients, with both responsive and non-responsive sites. To date we have seen no notable change.

Conclusion: the impact so far

Google’s mobile update went live earlier this week, causing much discussion and potentially panic among webmasters, who feared a hugely detrimental impact to their businesses.

Our analysis has shown that so far, this impact hasn’t been felt. While the numbers we’re looking at here are nothing like the huge traffic levels of global retailers or international brands, the percentage impact remains relatively insignificant across the board.

The industry where we’ve seen the biggest impact so far is tourism. Here, the decrease of 67% (where the website is not responsive) is of minor concern given the mobile visitor numbers to this particular site, but to a much larger travel business could be catastrophic.

The indication so far is that, as we predicted, there is no need for immediate panic in general. However, while Google is showing some leniency for now (after all, getting a mobile-friendly website up-and-running from scratch can’t happen overnight), it has been warning of its focus on mobile usability for some time (the Mobile Playbook having been released in 2012, for example). If you don’t already have a mobile-friendly site, now is the time to invest in one.

We strongly recommend gauging the urgency of this need by reviewing your industry’s trends. Is yours an industry where mobile usage among the target market is prevalent, such as the travel industry, online retail and leisure, or is it one where the majority of your audience still uses a desktop device by default (for example, B2B services or complex finance products)? Every business should move to a mobile-friendly website within the next 12-24 months where possible, but how quickly you make that change is very much dependant on the requirements of your users.

We recognise that an analysis of two individual days cannot provide a full picture of the impact of the mobile update, and we’ll be keeping an eye on ongoing organic mobile traffic levels over the coming months for our clients. For now, we’ve taken a screenshot of the Analytics data of a selection of clients from 1st February to 22nd April 2015. Some of the downward trending graphs are shown below.

Have you seen the impact of Google’s mobile update on your website traffic? Perhaps you’re another agency which has been able to review the impact across various businesses and industries? If so, we’d love to hear from you; contribute to the discussion in the comments below.