Google have released full details regarding their upcoming news overhaul, in a recent blog post, with a core goal in tackling the ongoing dilemma in reporting fake news. They state they have a “renewed focus on facts, diverse perspectives, and more control for users”, which is clear through their redesigned UI and customisation options. Fake news has been at the forefront of media attention since President Donald Trump made it one of his primary objectives to tackle throughout his campaign and following presidency. In an age where anyone can start a website and publish anything they like, fake news is easily created, and further spread through social media. In a 2016 study by Buzzfeed for example, they found that fake news stories surpassed engagement of genuine news stories by the end of Trump’s campaign. Fake news is not exclusive to presidential campaigns and stories can be fabricated regarding any topic, this is something that Google aims to stop.

If you have ever used the Google Now launcher or assistant on the mobile device, the new design for Google News will look and feel extremely familiar. Cards are more prevalent, segmenting news stories in chunks and making them easier to process, with a simple click expanding the card and unraveling the story.

Once pressed, these cards expose related coverage, pulling news from various sources, including comments on Twitter and live updates from the usual news outlets. As standard, two sources and statements regarding the news story will appear on the card pre-expansion, encouraging users to not take the first headline they read for granted. 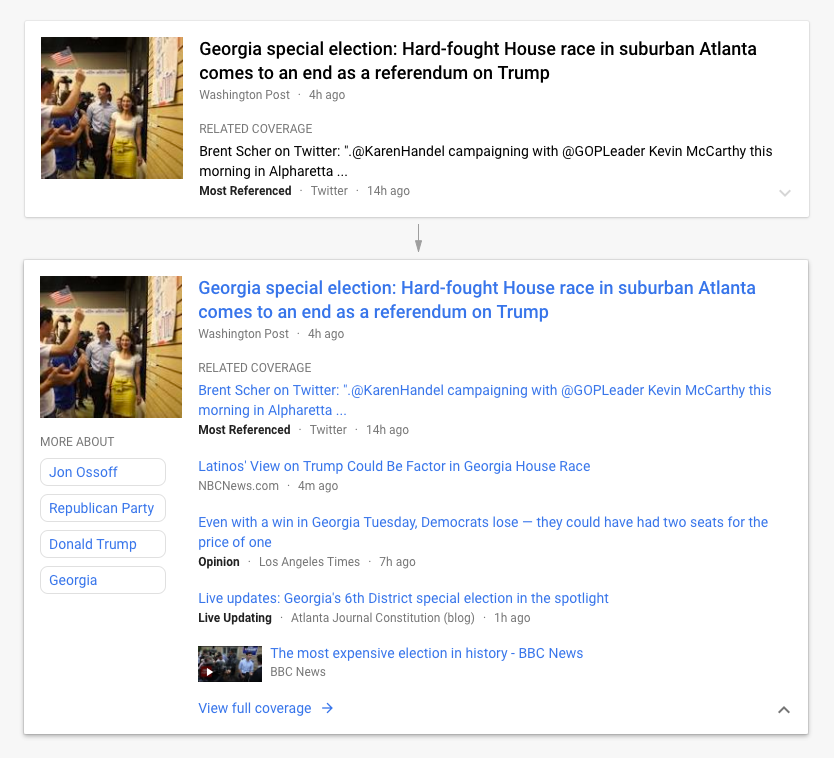 In addition to this, there will be a customisable column to the left of the page which you can make certain types of news appear, for example if you aren’t a sports fan this can be filtered out. This will mean categorising stories with relevant keywords will be more important than ever for content producers. News articles will need to be thought out thoroughly to target specific audiences who have customised their news feeds for certain keywords and categories. Smaller publications now have a better chance of ranking higher in the news section, even if this means piggy-backing onto national press coverage as the live card expands. Ultimately, keyword optimisation will be more essential to reach users who are not only engaged, but also interested in the specific content you are discussing.

Design-wise, the top tabs of the news page have also changed, slimmed down to three; Headlines, Local and For You – the latter offering more customisation to the news people choose to read.

The final feature is the “Fact-Check Block” which sits on the right of the page and acts as an anti-fake-news barrier. It will quote articles from reputable sources such as the BBC and Snopes, who Google have deemed responsible when highlighting potential false claims. This in addition to article labels will highlight potential errors, to help users spot fake news. 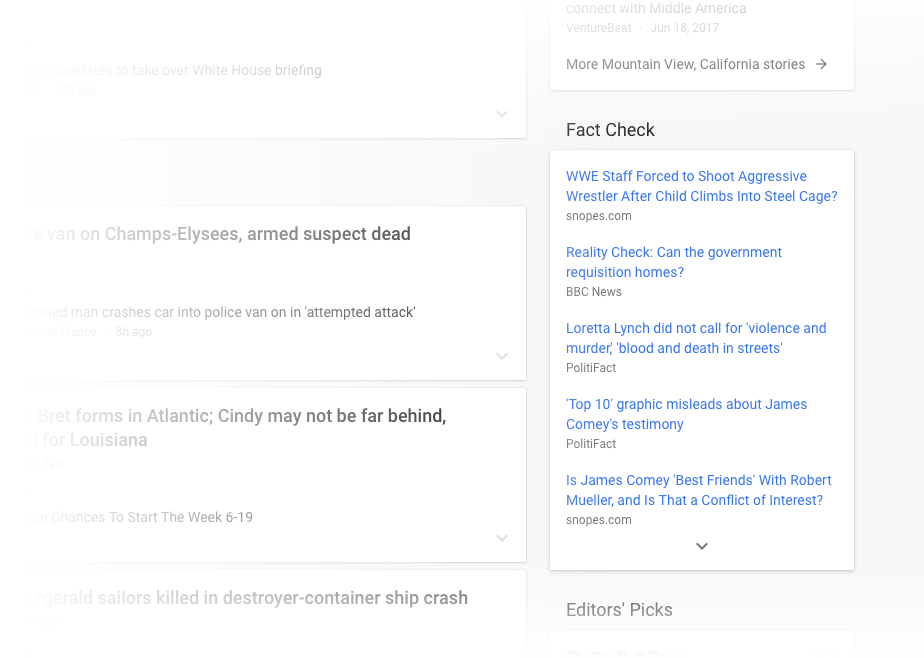 The new Google News design will include article labels to help categorise content and make it easier for users to get to the stories they want.

These tags will appear next to sources and stories, categorising them and helping users see past the headline. Google give 11 examples but state this may not be the limit to the labels, they are as follows:

The threat of fake news

Using Twitter as a source for news will always create problems. It takes simply one account to tweet something false then the retweets escalate, and a less reputable news source will spread the story.

There is potential this could infect Google’s fake news filters as the story unfolds within these live cards. Twitter may however be working on a way to combat this issue with a fake news flagging option, which would allow users to signal when something seems false. This would ultimately improve Google News and the live cards, however Twitter may never implement the change to their services.

In addition, the article label ‘Highly Cited’ could be mistaken for being synonymous with truth, but just because many outlets have reported on a story, does not mean it is automatically the truth. This update has done a lot to help users navigate around news stories and understand what may or may not be ‘fake’, but ultimately it is down to the individual to decide what they want to read and believe.

What does this mean for marketers?

From a link-building perspective, engaging content that is relevant to recent news may now have a stronger chance of being seen by users. Marketers should keep up to date with the landscape of their industry through signing up to email newsletters, or using tools like Feedly to keep tabs on their industry. Here at Impression we use tools like Feedly, Google Alerts and Hootsuite to stay engaged with respective client’s industries. For example, producing content for the renewable energy industry requires a vastly different knowledge set to a video production company. Tools like these help us keep engaged in an area we may not physically be a part of.

Users should also be encouraged to use Twitter to comment on news stories relevant to their industry, as there is a chance Google may recognise their authority and position them alongside developing news stories. This will not happen instantaneously, and will definitely be a bigger challenge for users with a smaller Twitter following. Due to Google’s focus upon news as it happens, speed will be crucial, as will consistency. Posting often about their industry expertise will develop a following and may lead to a feature next to a Google News article.

As previously mentioned, categorising articles and using relevant keywords is now even more integral. As people choose to slimline the news they receive, make sure your content isn’t cut out, you should create articles within relevant industry subcategories and a specific audience in mind. Good SEO practice will mean articles will not only appear in Google search results but in the live cards as well, more so than the previous Google News snippets, increasing coverage for businesses of all size.

A report last year by the Pew Research Center, found that 64% of American adults believed fake news caused them “a great deal of confusion”. Authority in industries will flourish now more than ever, as people are eager for truth and facts to clarify the ongoing dilemma of fake news. Marketers need to share expertise, report falsifications in the news, and ultimately authority will be built, which could lead to Google News sharing your content for you.

This update is not currently available for the UK but Google have stated it will be rolling out globally within the coming days.