How Google Got Rid Of 1.7 Billion Bad Ads 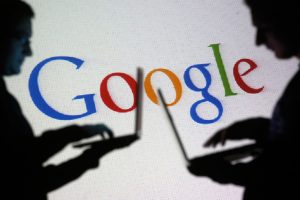 We’ve all experienced a bad ad. From fake news to disguised malware, bad ads can take many forms. But in their latest Bad Ads Report, Google claims to have removed 1.7 billion of them in 2016 alone. So how did they do it?

Removing almost 1 billion more ads compared to the previous year is no mean feat, and Google credits their success to a combination of expanded policies and cutting edge technology. The introduction of their policy banning predatory payday loan ads led to the removal of over 5 million of these ads since July. Even some 7 million disguised ads which attempt to slip through Google’s defences were identified and banned as part of the crackdown. The site also expanded its AdSense misrepresentative content policy to clamp down on website owners publishing misleading or deceptive content.

Seemingly mirroring the trend of 2016, the use of fake news (or ‘tabloid cloaking’) ads is also on the rise. Google took steps to combat this by identifying and suspending scammer accounts to prevent further misleading ads, and despite the relatively new nature of these ads over 1000 scam accounts were suspended in 2016. If necessary Google can also suspend the websites which these ads lead to, as shown by the 8000 payday loan websites which had action taken against them. Google also targeted ‘self-clicking’ ads on mobile devices, with 23,000 being disabled last year, improving the overall mobile browsing experience. 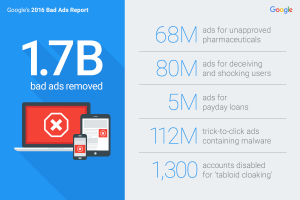 Not only that, but Google’s advanced technology has accelerated the response time for disabling ‘trick-to-click’ ads by 600% compared to 2015. These ads often cause users to accidentally download viruses, so their increased removal improves both the user’s online experience and safety. Along with disabling 900,000 malware-containing ads, Google also took action against 15,000 websites which pushed unwanted software on the user. An additional 6000 sites were also suspended for advertising counterfeit goods. Bans imposed on ads promoting illegal products skyrocketed too, with 68 million of these being for healthcare violations alone.

Despite these increases in safeguarding and detection, scammers are relentless in their attempts to trick Google’s systems. While advances in technology lead to improved defences, they also lead to improved attacks. However, Google stands firm in its commitment to protecting its users, their safe online experience, and the overall sustainability of the web.

One thought on “How Google Got Rid Of 1.7 Billion Bad Ads”