A two-part seminar on automation in paid search; Optmyzer’s Frederick Vallaeys and Adalysis’ Brad Geddes outline the importance of automation in PPC, and how human work can work in tandem and support this rapidly growing aspect of PPC.

Frederick kicked off the session by asking the ever-important question: Why do we need to automate?

For these reasons, we need to embrace automation and learn to work alongside it, as AI innovations are accelerating – We can’t expect to be given a living for doing something a computer could do, better.

This leads to a second question: What roles will we play?

Brad Geddes then took to the stage to further explain the role of humans in a machine-dominated world. He outlined three levels of automation: Manual, Computer Assistance and Full Automation.

The advantages of doing everything manually:

Whereas, the disadvantages are simply that this entails more, often boring, work.

Outlined below are a few examples of manual work having an advantage over automation:

So when should we think about automation? The answer was simple: Can we flowchart it and be happy with every single decision? If so, do it. For example, its possible to see what the outcomes of automated bid adjustments will be, so these should be automated.

Brad moved on to asking how automation will affect our jobs: Automation creates or shifts job responsibilities – jobs are lost but more new jobs are created.

For example, the rise of the bank teller: When ATMs became popular, bank branches needed fewer employees due to the automation of withdrawals and deposits, but as it became cheaper to operate banks as a result and everyday tasks become less time-consuming for consumers, they had more intelligent questions to ask, so more banks opened as a result.

We can apply this to Paid Advertising, too. Market research, sales orders and stat assistants will be made redundant if their jobs don’t evolve into someone who interprets research, stats or provides sales strategy.

The session ended with the question: Who wins? If the tasks included only creativity, strategy, storytelling, empathy, then humans. If it includes only repeatable data, stats, and pattern recognition, then computers win.

A combination of the two, or “Computer Assistance,” is vital to ensure that marketing campaigns can be run effectively, whilst being given the chance to grow whilst keeping an eye out for those mistakes which can be detrimental. 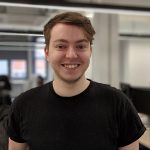 PPC Account Executive with a love for data-driven analysis. Puts the "fun" in "conversion funnel."

Greg has specialist knowledge in PPC and Paid Media.

PPC Account Executive with a love for data-driven analysis. Puts the "fun" in "conversion funnel."

Greg has specialist knowledge in PPC and Paid Media.