Lawrence Hunt is Chairman & Managing Director at addmustard. His talk this afternoon is on the rise of the aggregators and the implications for search marketing. According to the host, Lawrence is a serial businessman and has set up an airline and loveholidays in the past! 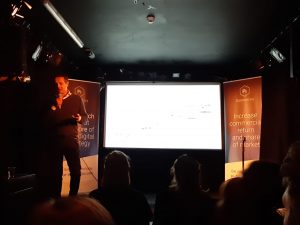 The future of search marketing (a Brexit free presentation)

Last year we saw some big changes in search marketing, says Lawrence. Today his talk will go over the following:

A brief history of search

Search started in the early 90s as part of the US military. As academia become more prolific in the early 90s, web crawlers were developed, which was followed by the development of search engines such as Yahoo, before Google came in during the late 90s and began to dominate the market. 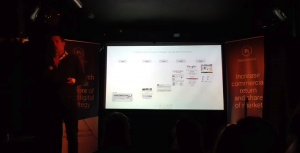 Why did Google dominate?

They had a better algorithm than anyone else. Always had the best user experience and they have always focused on that. According to Lawrence, they have 125 different versions of Google algorithm running at one time.

Just how big are Google?

We know its big – but where is it going to go?

Last year we saw a considerable decline in search terms across certain industries, claims Lawrence. What was going on? Google stopped publishing data it’s difficult to see what’s going on.

What does this mean?

Search queries are declining, says Lawrence. The volume of queries in most sectors is in decline, supported by data from Merkle and web.com. Alongside this, CPCs are increasing.

What do we believe is happening?

People are using mobile more, but they are not using Google as much on mobile. 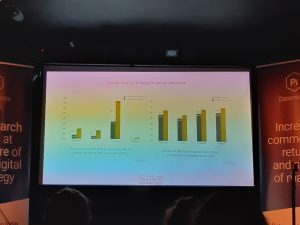 What do we know about Amazon?

Amazon made 3bn profit from advertising last year and they have 6% of global ad spend. The shift that we are seeing is away from search engines and towards these kind of aggregator apps. This is really important for us to recognise as search marketers.

For search marketers this is a big opportunity, says Lawrence, as it is cheaper and there is better search intent. Amazon isn’t the only aggregator app where we see this happening of course, but it’s currently one of the biggest.

Why Amazon? Conversion ratios are higher.

We believe aggregators will be better hunting ground for brands to dominate market share.

Conclusions: what does this all mean?

RankUp #15 – Ruth Everett from Deepcrawl on Teaching Yourself Python