Back in February 2016, Facebook introduced new reactions to posts. This was in response to the audience demand for more ways to express themselves other than a ‘like’, specifically a ‘dislike’ button. Instead, they gave us love, wow, haha, sad and angry.

They hoped that these new reactions would increase user engagement and allow business owners to better understand how people were interacting with their content. Ben wrote a blog post about this back in 2016, which you can read here.

An Increase in User Engagement

Since the release three years ago, user engagement on Facebook has significantly increased. In a 2018 study by Quintly, it was shown that post engagement with the new reactions was up from 2.4% in 2016 to 12.8% in 2018. This can be seen in the graph below. 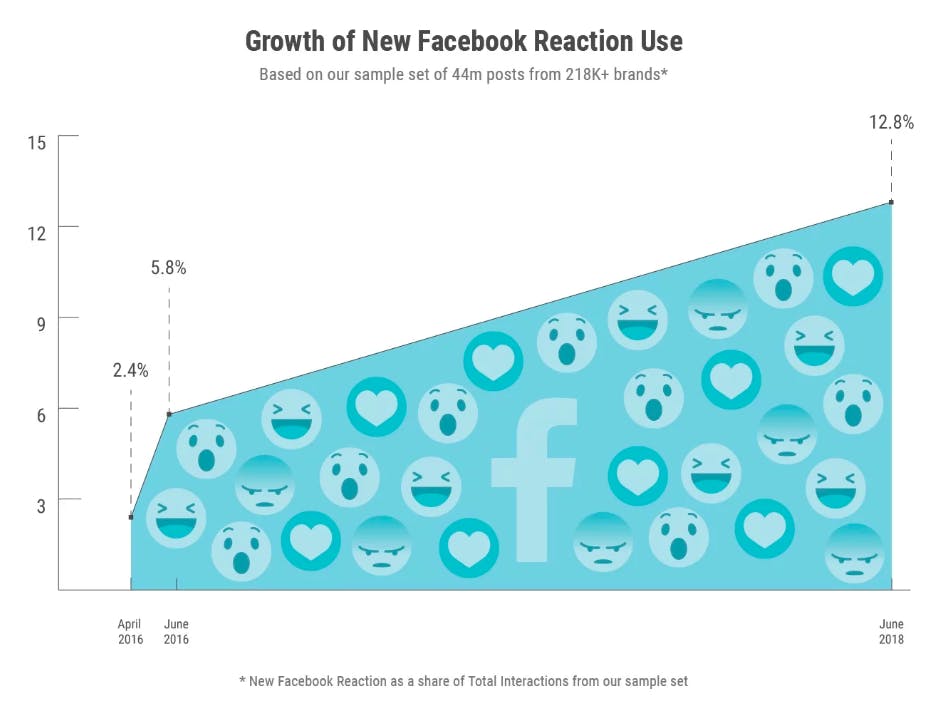 Research has also found that 4 out of 10 millennials would rather engage with an image rather than reading text. It is no surprise, then, that other social media platforms are beginning to follow suit.

These are celebrate, love, insightful and curious.

LinkedIn’s Cissy Chen has commented on the new reactions, which were created in response to the user demand for more expressive ways of communicating. LinkedIn conducted global research to decide upon the reactions, by analysing 1-2 word comments (great news, well done, congratulations, for example) and by asking members for feedback on the proposed reactions.

Here is what Cissy believes the reactions will be used for:

“You can use Celebrate to praise an accomplishment or milestone like landing a new job or speaking at an event, or Love to express deep resonance and support, like a conversation about work-life balance or the impact of mentorship. Insightful can help you recognize a great point or interesting idea, while Curious lets you show your desire to learn more or react to a thought-provoking topic.”

It will be interesting to see how users interact with these new reactions and whether LinkedIn’s overall engagement rate will rise over the coming months.

Unlike Facebook, LinkedIn hasn’t introduced a negative reaction. This may be because of the nature of LinkedIn as a professional platform. By avoiding an angry reaction, they have cut out the possibility of trolls targeting specific brands.

However, it could have been useful for businesses releasing new products, so they could gauge an initial reaction from their audience. It’s possible that LinkedIn could release a negative reaction in the future- keep your eyes peeled!

What Does This Mean For Advertising?

It is clear that social media platforms are heading towards a more interactive experience. Gone are the days of scrolling through and aimlessly pressing ‘like’ – we’ve now got a range of reactions to share. But what does this mean for businesses?

It is likely that simple text posts about your business could be lost in a feed full of images and videos. Sales pitches are getting old and consumers are starting to look for more human, relatable content. In order to capture your audience’s attention, you need to stand out from the crowd.

Here are my top tips for advertising on social media:

Do you engage with posts on social media by using reactions? Let us know in the comments below.

I'm an SEO Strategist at Impression, writing quality content and conducting keyword research for our clients.

Sophie Darr has specialist knowledge in SEO and On Site Content.