Now in its fourth year, Digital Day sees digital agencies be partnered with local schools and colleges to lead presentations on the digital industries and the roles in the sector, and help students enter national competitions.

Impression were keen to be involved and were particularly interested in educating students around the services we offer including; SEO and PPC.

For our first digital day, Impression was partnered with The Dukeries Academy in Ollerton, a school that already has great provision for digital and tech, including an ‘Innovation Room’ and named ‘Digital Champion’ students.

Chloe and I travelled over to the school on Tuesday 15th November and were immediately impressed by the enthusiasm and knowledge of the sixteen students aged eleven to fifteen who had been selected for their skills in writing, creativity and IT.

We started the day with a presentation about Impression’s different departments, life in a digital agency, our team’s varied skillset, and the wider digital industries. We then introduced a challenge sponsored by Tata Communications that asked students to think up a digital solution to a problem faced by a disadvantaged community, such as unemployment, gender inequality or poor education. The brief stated that the community had access to mobile phones, laptops and lightweight drones.

Working in groups of three or four, students had around three hours to plan, create and then present their ideas and they set to it straight away.

Alongside the Head of Technology at Dukeries, Chris Francis, we were on hand to help with questions and provoke the right questions, however all ideas came from the students – and there were some fantastic ones!

We were really impressed by the enthusiasm of the students, many of whom chose to work on the challenge over their lunch hour, and the organised, yet uninhibited way that they faced the challenge.

During this next stage of the process, it was impressive to see how the students organised themselves within the groups, how the leaders, or project managers, emerged, and how tasks were delegated.

Chloe, one of our SEO executives, reflects on her experience of Digital Day 2016:

“It was really interesting to watch different groups of children brainstorm and compare their technique to the way we generate ideas here Impression.

“If there’s one thing I took away from the day, it’s that the way in which the students freely brainstormed without considering budgets, consequences, risks and time restrictions. Free from these external matters, the creativity really flowed and the students came up with some fantastic ideas.”

Chris Francis, Head of Technology at The Dukeries Academy, said:

“Digital Day offered students the opportunity to try their hand at broad tasks and embedded digital concepts into a learning environment.” 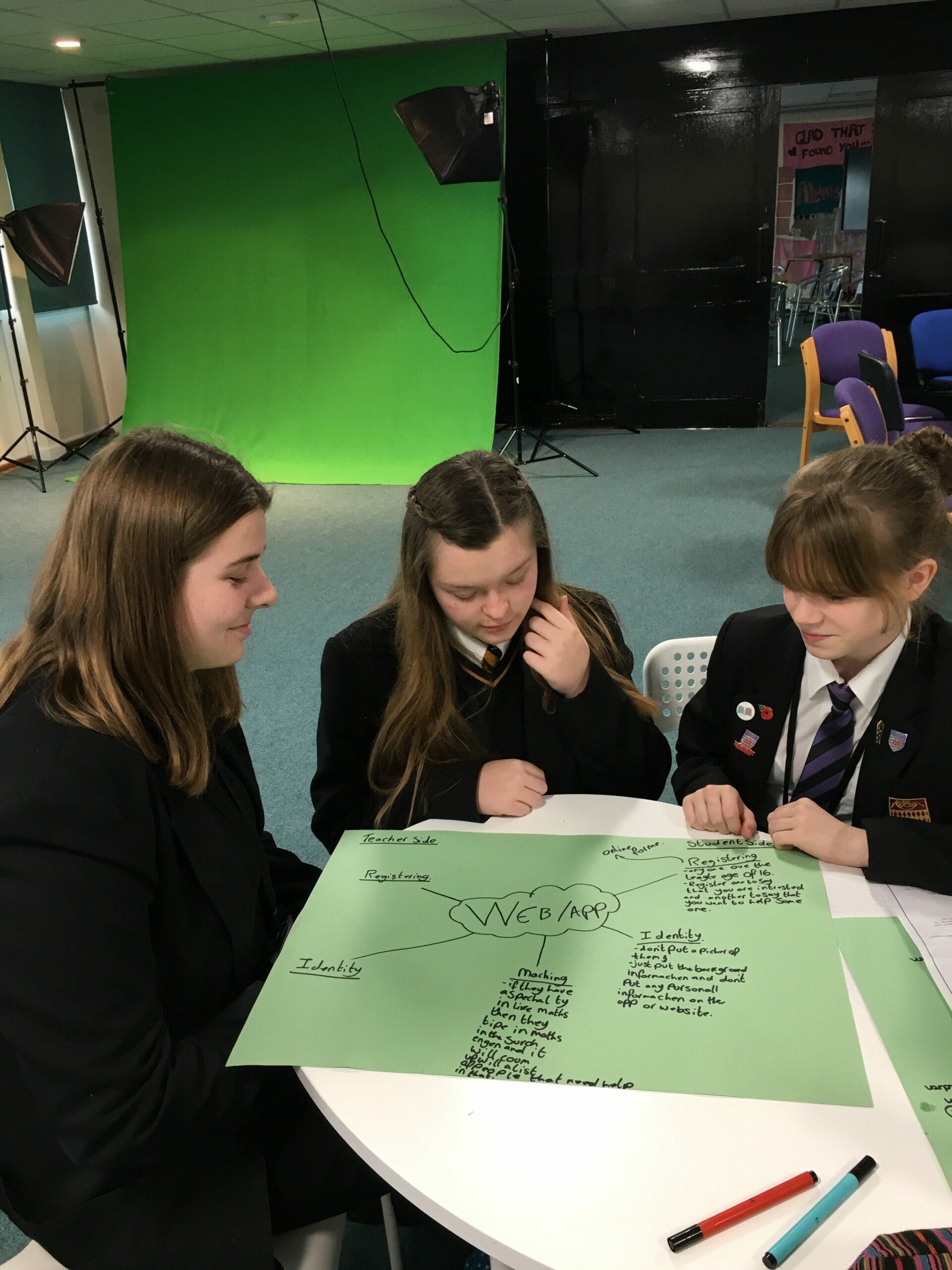 After a nostalgic school lunch and a hurried hour of finishing off designs for apps and websites, adding explanations to entry sheets to back up concepts, it was time for the students to present their ideas to myself, Chloe and Chris in a Dragons’ Den style pitch. Once again, we were blown away by the presentation skills demonstrated by the students, who articulated their ideas in a succinct and emotive way. Ideas from the four groups included a video game with a female heroine protagonist that was designed with the aim of reducing gender inequality by introducing a powerful, female protagonist within an entertainment context.

Another group pitched an app called ‘Unlock’ which raised money for charities by encouraging users to make a donation to unlock levels, and another created an information website on women’s and men’s rights.

The panel then had the difficult task of choosing a winner, whose entry would be entered into the nationwide competition. It was a tough decision, but we believed that the following idea was very well pitched and could see it working in today’s society.

‘Hand in Hand’ would promote the exchange of education and goods through a website and app platform. Users can sign up anonymously and list the skills or goods that they would like to acquire, for example maths or a toaster. The other half of the app is where teachers and donators can sign up and list which skills or goods they have to offer; the two are then matched.

So, watch this space! 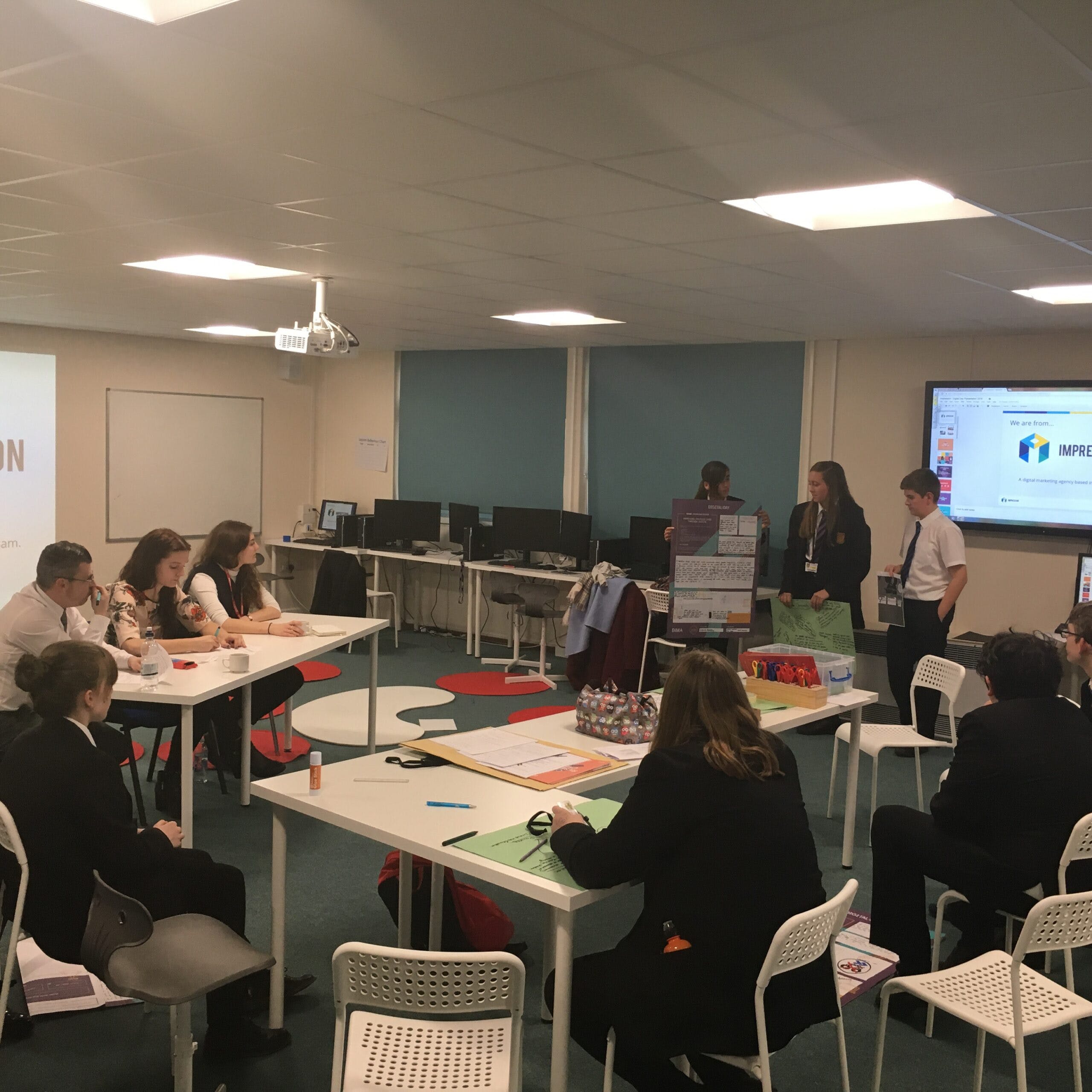 BIMA estimate that 750,000 more digitally skilled workers will be needed by 2017 and that 200,000 of these will be young people; we need to act now to make sure that supply meets the industry’s demands and our outreach work needs to start at secondary schools to make sure that students are considering careers in digital alongside professions such as teaching, law and medicine.

Digital technology and the internet already play a big part in the everyday lives of young people but are often just thought of as hobbies! Yes, we use our mobile phones in our free time and spend our journey to school or work scrolling through social media channels, but it’s important that young people know that they could forge a career in these areas and what sort of roles exist. Digital Day was a fantastic opportunity for Impression to help promote these opportunities to the digital marketers of the future and for myself and Chloe to be inspired by the enthusiasm and ideas of the students.

We’ll finish on the feedback from a year nine student at The Dukeries Academy:

“The presentations and challenges that we took part in on Digital Day created an innovative atmosphere and opened lots of doors.”