December 2021 saw Google complete a Product Review Update. Aside from that, there were several other algorithm and search industry updates.

As usual, we’ve set out using a traffic light system to show their relative significance – a red light is for a priority update that requires your attention, a green light highlights less pressing news, and amber sits somewhere in the middle.

Read on for the latest news and updates in the search industry.

A Roundup Of The Updates We Saw Throughout 2021

It’s the end of 2021 and so we have looked back at the algorithm and search industry updates that were rolled out throughout the year, which included several Core Updates, Page Experience Updates, Spam Updates, and other changes.

OnCrawl have put together a useful Google algorithm updates in 2021 infographic to help illustrate the changes that SEOs and digital marketers were faced with this year.

Here is a summarised list of Google updates for 2021:

On February 19, MozCast measured a dramatic drop (40% day-over-day) in SERPs with Featured Snippets.

Google announced an update that rewards in-depth reviews over thin reviews and spammy affiliates (affecting English-language only results at launch).

The June 2021 Core Algorithm Update caused more visibility fluctuations in some verticals than others.

Google announced a new technology that could produce titles for web pages, whilst placing greater emphasis on correctly summarising the content of a page.

We do not know if this update targets link spam, content spam, or other forms of search spam.

The November Core Update was the third core update released by Google in 2021.

This update will impact product reviews on English-language pages. Google confirmed in early December that a local search algorithm update began rolling out at the end of November and ended on December 8th.

The “rebalancing” of ranking criteria Google considers when determining local search results was part of this update.

Although the improvements wouldn’t have been noticeable until the first week of December, this upgrade is officially known as the November 2021 local search update. 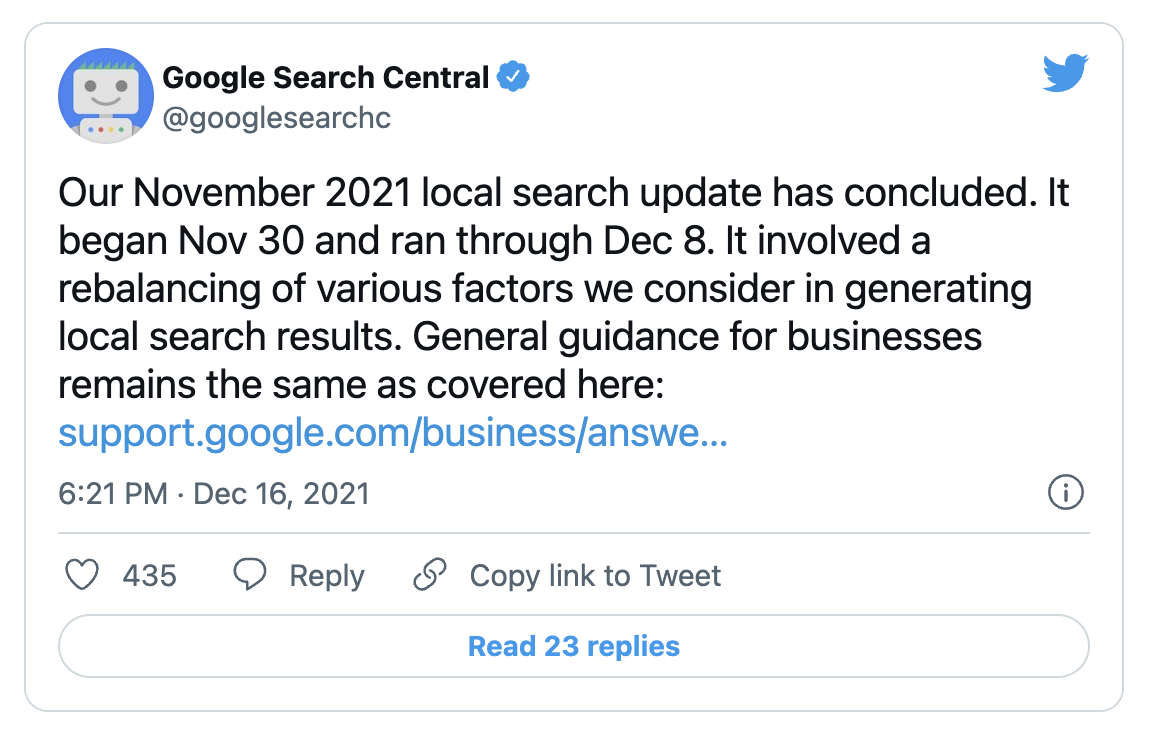 Due to the changes – your prior efforts may now hold less weight. If you’ve focused a lot of attention to certain areas over others, which has worked well in the past, this could now change.

As a result, rebalancing your efforts may be the best approach when responding to this change.

For example, if you’ve been focusing on optimising for relevance by filling up your Google Business Profile with information, now could be a good opportunity to shift your attention to your company’s prominence – and vice versa.

Google still recommends that businesses follow their ‘how to improve your local ranking on Google’ guidance – even if the weighting of ranking factors is not disclosed.

On the 1st December 2021, Google announced that it was rolling out a second Product Reviews Update (following the first update of this kind in April 2021). The update was then completed on 21st December.

Focusing exclusively on third-party review sites, these Product Review Updates are designed to reward product reviews that offer comprehensive research, rather than short-form content that simply summarises the features of products. To learn more, check out our April 2021 Google Algorithm Updates blog before you read on.

Here, we’ll focus on the aims and impact of the December 2021 Product Reviews Update. In addition to the nine best practices set out by the first update, this further change introduces two new guidelines for review creators to follow:

The impact of the update has been mixed, with some review sites seeing sizable uplifts in organic visibility and traffic whilst others seem to have suffered. In many cases, sites initially saw an increase or decrease in organic sessions followed by a reversal of the change later on in December. Let’s take a look at a few examples.

SISTRIX data shows that tech product review site Gizmodo started to see fluctuations in Visibility Index resulting in an overall decline from the start of December:

Other sites in the tech product reviews niche like TechRadar saw almost no impact on organic visibility:

ExpertReviews, a popular third-party review site spanning multiple product categories, saw an uplift in visibility that was maintained after the initial increase:

Having suffered during the November 2021 Core Update, vehicle reviews site TractionLife saw an initial rise in visibility followed by a drop down to its previous levels:

If you work on a third-party reviews site and saw significant fluctuations in traffic or rankings throughout December 2021, it’s possible that this was due to the Product Reviews Update (although many sites were still feeling tremors from the November 2021 Core Update during this time, so it may be difficult to establish cause and effect).

Your first port of call should be to take note of the updated guidance regarding product reviews:

When you make these changes to your product reviews, it’s possible that you won’t see an immediate impact. As with many other Google updates, you may have to wait until the next iteration of the Product Reviews Update before you start to see the results.

Been affected by either of the Product Reviews Updates and not sure how to proceed? Get in touch today and find out how our SEO team can help.

If you have a verified property on Google Search Console, you may have received emails from the 10th December 2021 onwards alerting you that “new Coverage issues” (specifically redirect errors) were detected on your site.

Google confirmed a few days later that these alerts were an error on its part, and not the result of any genuine issues with property owner’s sites:

Barry Schwartz shared an example of one the emails he received during this period: 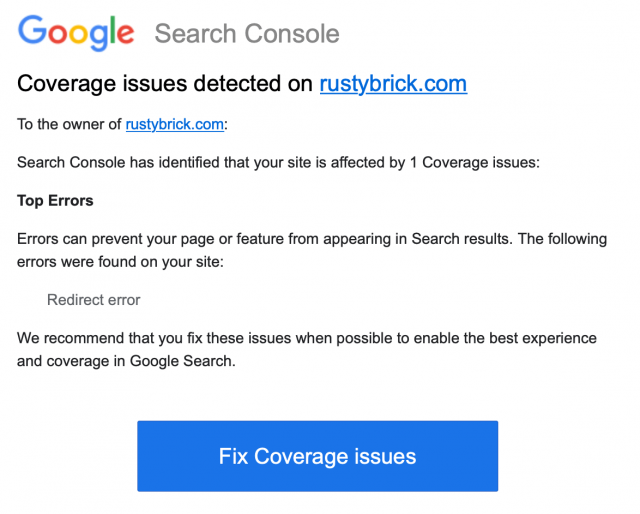 When users clicked through from the email, they were taken to the Search Console coverage issues page. This interface was also displaying the redirect errors as a result of the bug:

The bug was then resolved on 14th December 2021. Pages that were dropped from the index have been scheduled for recrawling.

In short, there’s nothing for site owners to do in response to this Google Search Console bug.

If you received the alert emails and saw a peak in redirect errors from around the 10th December 2021 onwards, you can safely ignore these. As Google has scheduled the affected pages to be recrawled, it shouldn’t impact your organic visibility in any significant way.

Google’s Got A Brand New Metric

Back in November 2021, Google requested feedback on an “experimental responsiveness metric” they had been working on. This new input delay metric measures groups of interactions rather than single interactions and the goal is to design a metric that gives a “more meaningful measurement of the user experience”.

There’s a potential this metric could replace First Input Delay (FID) but only time will tell. And Google is still taking feedback so there’s plenty of development to come. With these sorts of things, it’s important to be aware but there’s no need to change your Data Studio dashboards or reports.

Google has officially launched a new enhanced autocomplete search suggestions that may include a second column of predictions, and provide easier access to content related to a search. Google has confirmed that it is also testing a new edge to edge autocomplete interface and other full-width elements on desktop search results.

The new enhanced autocomplete interface may show users additional search predictions including people also ask, people also search for, and other content related to the search.

To experience the new autocomplete feature, users can search on the Google desktop interface and then click back on the search box to view more predictions on the right hand side.

Google is also testing another variation of autocomplete called edge to edge where the search box blends directly into the other elements of the SERP. Google essentially removes the border around the box where you input the search query, making it go edge to edge with the rest of the results.

In addition to enhanced autocomplete and edge to edge, Google is also testing other full width elements that have not yet been launched including full width image pack, full with featured snippets and plenty more.

Keep an eye out for more SEO news in our next blog post! Can’t wait any longer? Contact us to talk about your SEO strategy for 2022.

I joined Impression in January 2021 as an SEO Executive after spending 5 years in marketing roles within the IT & Cyber Security industry. It was during this time that I became aware of the importance of SEO and optimising the content I was creating. With a first class degree in Media and Communication under my belt, my role in SEO is the perfect marriage of all my acquired skills from my media and marketing background.