The final panel discussion to close CommsCon included an open discussion with a variety of high level journalists.

According to Cision, journalists today are producing more content than ever before and the number of social influencers increases every day. However, there exist fewer journalists which means they’re busier than they’ve ever been. This means as PRs it’s pertinent we know what the best ways are to go about communicating our messages most effectively through them. The panel included questions and answer sessions with the following:

The panel was moderated by Richard Griffiths, director of strategic communications at Ketchum. 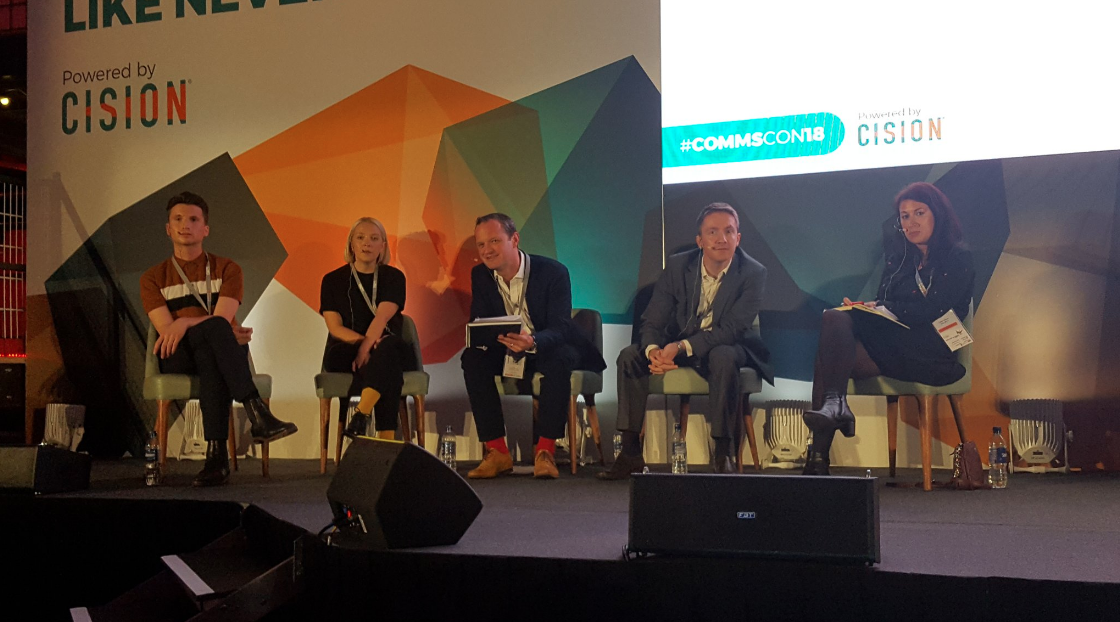 What does a typical day look like for you?

Josh
“Nothing is ever the same. You’ve got to be constantly on the emails and every day is very intense and different.”

Ellen
“No two days are the same. I look after video journalists, but mainly my time is spent answering emails and making sure everyone is in check. At Pink news we create 20-30 stories everyday, but we also have youtube channel we publish on twice a week, so it’s vert face paced.”

Paul
I do a lot of reporting myself, but this is interspersed with management, meeting sources for coffee and a large part is editing opinion pieces and features. I generally get few hundred emails from PRs a day.”

Nada
“My day is more structured. I’ll send over a memo to the news desk at 10:30 on what I will feature that day. Generally I’ll send over 2 stories a day. Then I will meet PR for a coffee, or something similar. A lot can happen in a day so stories are always liable to change.”

What are PRs doing wrong?

Ellen
“When I worked at the Standard I would just mute my phone all morning. Really caring about the specialism of a publication is the most important thing that a PR can do.”

What do you value in PRs?

Josh
” I will always reply to people I know. You also have to make sure that a celebrity interview is relevant to the Glamour brand. Glamour is a beauty first brand – so making sure the focus fits within that is crucial. You’ve got to make sure that the content has social sharability too – this includes using influencers who have a big social following.”

Ellen
“Getting my name wrong.”

Josh
“You need to have personable emails. Flattery always helps. Also, have respect for what we do.”

Paul
“Your outreach needs to be targeted and specialised. Don’t check that we just received an email or call straight after an email.”

As an industry are we making a mistake by calling?

Paul
“Personally I don’t understand the agency role. I only want to work with in-house people generally because they know the topic and are better at it. My advice would be to PRs that you should thoroughly put research into the topic.”

Nada
“I agree. Agency PRs don’t seem to know the industry inside out. You want someone who can drill down into the detail.”

Typically whats your audience/who are you writing for?

Ellen
” ON Pink News, the website and Snapchat audiences are different.”

Website: typically 24-35 (female and straight) allies make up the majority of the audience
Snapchat: mainly outside of the UK: 13-25 year olds – male or female or gender fluid

“The demographic is for allies or parents, all those who want to know more about LGBT. We are specialist but doesn’t mean that the audience is only LGBT. Most of our content comes from our own readers, and we also conduct a lot of our own polling and data.”

Nada
Print: mid 50s – more females than male but not by too much. Left leaning – but not all Labour voters. It’s the sort of readers who have paid off their mortgage and like to travel, and are predominantly British.
Online: younger audience

“Our editorial process is separate for online and print but conversations are being had all the time despite being different teams. 98% in print will appear online as well.”

Josh
“The audience of Glamour is the empowered millennial woman. We are very heavy pro-female empowerment. The magazine in print is older readers, generally those people who have been loyal for years to us and still buy us in print. In digital it’s the 18-35 woman, whereas on Instagram and Youtube it is much, much younger. Our audiences of course change across different platforms.”

How has the rise in influencers changed the role of journalism?

Josh
“Historically there was a lot of distrust around influencers. However, Glamour has embraced the influencer. Of course influencers want to be associated with print publications still because of the prestige, and no one should push them to one side and think that journalistss could do a better job. It isn’t true.”

Nada
“Yes, a strong image will help a good story. You should always think about the image to go alongside a good story.”

“As a sidenote, I think PR people do too many stories based on surveys. It’s not news. Some of them only have 1000-2000 people in the survey as well, which I just don’t think is enough.”

How much do people jump on consumer news?

“We love to embrace the current news stories at Pink news. Without being politically incorrect, we love putting a gay slant on a popular straight angle.”

How could a PR have coffee with you?

“Have a phone call with me first. The PR should ask me what I want, because I don’t want something self serving. They should take away what I want and go away and work on it. Most journos are interested in building relationships, you just have to do it the right way. I think a bit of humour always helps.”

Media landscape as a whole: what are the biggest changes over the last few years?

Nada
“There are fewer journos. Can’t rely on freelancers: budgets have been cut. Publications are merging which means the same content is often shared across publications and journos end up taking on various different disciplines and roles.”

Paul
“There are so many more channels which means journalists are more stretched.”

Ellen
“Don’t underestimate the importance of junior reporters. A lot of the time junior reporters make the stories as everyone else is so busy so forging relationships with the younger people is just as important.”

How can PRs make it easier?

Nada
“Relationships are important. Meeting with people for breakfast, coffee or a glass of wine. Relationships which have lasted years are still the most important.”

Are journos busier than ever today?

Josh
“I could not be busier. I’m flying to New York tomorrow and then Germany next week and I have to be doing so much all the time. These days you have to get so much out of one story: video content/social media etc. All the time I have to be thinking about the sharability of this on my Instagram story and what kind of social content I can create out if it. It’s a very competitive industry: we want to be getting all the traffic ahead of our competitors so we’ve got to be pushing for it.”

Fake news. Has it affected you much as journalists?

Paul
“It has affected the reputation of journalists and news. Any mistakes or questionable stories that you do today, people will question it. Trust is very important and I think it will become increasingly important in the media.”

Nada
“There is no such thing as fake news. Theres news or hoaxes. These days we feel even more responsibility to get the news right. Everything is checked by about 6 people plus lawyers.”

Ellen
“A lot of publications are guilty of misrepresentation of fact. Today it’s more important than ever to not get things wrong, now you will not get away with f*cking up. We cannot get away with hiding things in the correction any more. We bear more responsibility.”

Paid? How does this affect the world of journalism?

Nada
“I only ever did one sponsored post and chose not to do anymore. I felt like I couldn’t be objective and felt like it wasn’t true journalism. I am very uneasy about it.”

Ellen
” I actively want to work with the right brands in the right context. I would never run a campaign that doesn’t sit in the right way with their brand but really value sponsored content can work really well. The content has to be credible ultimately, and I think it’s easier to work this into lifestyle publications.”