The Amazon Web Services (AWS) Summit London kicked off yesterday with the keynote speech (after some coffee to wake everyone up as well as cookies to keep people going through the  two-hour talk). Dr. Werner Vogels took center stage as Amazon CTO and was proudly boasting about AWS’s developments, both recent and from the past. As the driving force  technological innovation at amazon, he was happy to talk about it how a lot of the recent change and new products have come about through his influence .

Joining him on stage were multiple heads of companies lining up to sing the praises of AWS and the benefits it has brought so many firms around the globe. Tom Blomfield, from the upcoming banking startup Mondo was among them. Tom and co at Mondo have always thought that traditional banks were behind the times and not reacting to how people now access the world around them. They had always thought there was a better solution out there, but with restrictions on financial applications and data there was never a reasonable entry point into the market.

With the FCA releasing a report in late 2015 stating that cloud computing was now at a point where it was a secure and viable method for general use, Mondo seized this opportunity to revolutionise the way banks behave and have been flooded with sign ups since they announced themselves. Even after the keynote their area in the ‘Startup Section’ was flooded with people wanting to sign up, but for Android users (like myself) we will have to wait a bit longer for the app even when though we are 40,000 deep in the queue!

Mondo was not the only financial business to be featured in the keynote. Travelex a british founded money exchange company and the first non-bank to be allowed into Heathrow Airport, was also there to bask in the keynote praise. Travelex has had recent success creating its Supercard, an app/physical cart hybrid that’s used to cut out bank charges while abroad. One of the issues for Travelex setting up this new card system was that it was actually getting too much interest for its partners or systems to be able to process. So its development team turned to AWS to solve the issue. After getting many expensive quotes from services with large development periods they decided to take the matter into their own hands, and with AWS (EC2 and Lambda) they were able to create a solution with two developers within two weeks. 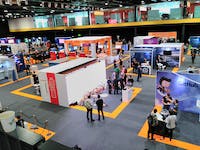 After the keynote there was a short break when we could visit the partners of AWS at their stalls. There was also time to have a play with AWS in the hands on labs, provided by qwiklabs, with lots of in-depth training sessions to be done at each person’s own pace with one free lesson per delegate.  The extensive instructions and detailed test AWS environment that was available to play in, manned by seasoned staff who were on hand to talk through anything, provided me with a great learning experience..

Also spotted among the partners were many AWS staff, including architects who were on site to provide answers to all the technical questions you could wish to ask (as long as you don’t mind waiting 10-30 minutes). After this were a number of sessions aimed at either fundamentals or in-depth looks at different AWS services. With each of these was another company, there to big up the AWS ecosystem. Among them were the likes of trainline and Aon, all of whom  are using AWS services to the fullest extent. They mostly said they enjoyed the fact that AWS was continually changing all the time and adding services that the users themselves are asking for, to help them be more efficient in their development.

Here at Impression, as users of many AWS products it’s always good to see the many benefits of using their service. But also it’s great to see the innovation from other companies using these services, staying ahead of the curve that is the ever growing cloud platform.

I'm the Lead PHP Developer at Impression. I love coffee and can often be found discussing online gaming. I also have a dog called Lupin who visits the office from time to time.

See all articles
3 steps to designing a successful landing page