The art of the press release

Last week I wrote a blog exploring the relationship between journalists and PRs (inspired by a recent survey by PRWeek and Press Gazette), and gave some top tips on how to improve those connections.

Following on from that, I thought I’d also share some pointers on how to write a good press release. Yes, it’s a topic that has been covered time and time again, but one that’s definitely worth reiterating. During my time as a journalist on a regional daily newspaper, I received a dozen or so press releases a day (my editor was sent much more, and the news desk even more than that), and those that were poorly-written, or unusable for some of the reasons I’ll go into below, were binned in just a matter of seconds.

Journalists are only interested in stories that their audience will want to read (i.e. something that will excite, intrigue, shock or inform, and is not blindingly self-promotional). The best advice I can give here is to make sure you’ve actually got something newsworthy to talk about (see examples in my previous blog), and to find the best ‘angle’ – the most interesting thing that will be used as the intro to hook readers in.

During their training, journalists are taught to follow the ‘inverted pyramid’ when constructing a story (see below. Credit: PRCA). If you follow this, then you’re already off on the right foot. 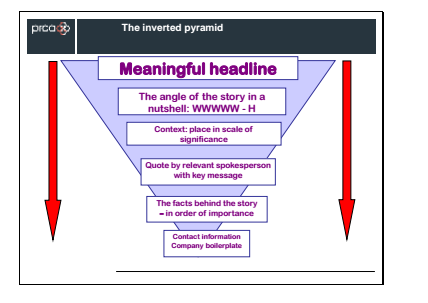 Make the most of quotes

Journalist and PR coach Janet Murray gives some great advice on this topic in her book Your Press Release is Breaking My Heart. She says: “Quotes can be helpful to journalists…but a common beginner’s mistake is to use quotes to provide information (which has often been mentioned elsewhere in the press release anyway) and include jargon and/or technical language.” She adds that quotes should provide insight and opinion and sound like a real person said them! Try to think outside the box a little too – journalists don’t appreciate reading “I’m delighted” or “I’m thrilled” time and time again (particularly in press releases concerning award wins or new staff).

Where possible, try and include two or three quotes in your press release. It will take you longer to do this, and you may need to liaise with other PR agencies to get what you need, but it will be worth the wait as your story will be more credible. If you’re going to include Joe Bloggs off the street (perhaps because he’s tried your clients’ product/services) then make sure you include his age and the area in which he lives. This is the style for regional newspapers, although magazines will be different. Check what they’ve done in the past and go with that.

This relates to the previous point about quotes. Journalists are super busy people, and as such they only have a couple of seconds to scan a press release to decide whether it’s worthy or not. If they can’t get past the jargon then you’re jeopardising your own chances. If need be, ask your client to explain a technical word in a way a layperson would understand (this is doable 99% of the time!)

While we’re on topic of removing words, get rid of any overused or meaningless words – including leading and state-of-the-art (my two biggest bugbears!)

Stop with the RaNdOm capitals

Also a bugbear of mine. Not only is it annoying but it means extra editing time for the journalist/sub-editor. Depending what publication you’re writing for, job titles don’t need capitalising either.

Make it a smooth process

It’s always worth having a ‘Notes to Editors’ section a the bottom of a press release, to give journalists any additional information you think they might need, plus a way of contacting you if they need anything else.

When you’re finally ready to pitch to the journalist, my advice would be to include your press release at the end of your email and attached. If you’re determined to follow it up, wait at least a couple of days. I often get replies several days after I’ve sent a press release, and sometimes journalists will hold your story to be used at a later date (perhaps on a quieter news day).

Do you have any press release tips to share? Leave us a comment below and let us know!

One thought on “The art of the press release”