Journalists and PRs – what do they really think of each other?

Journalists and PRs – friends or foes? Well, according to a recent survey by PRWeek and Press Gazette, it’s somewhere in the middle. As someone who has spent time working on ‘both sides’, I thought I’d share my opinions on the main findings…

When the first installment of the results came into my inbox, entitled ‘The ‘Hacks vs Flacks’ survey: Half of PRs don’t cut it, say journalists’, I wondered whether the whole thing was heading towards a one-sided debate.

Both professions were asked whether they think their counterpart is up to the job, to which 38 per cent of journalists strongly agreed, or agreed to a greater extent, and 46 per cent disagreed or strongly disagreed.

More than two thirds of PRs, on the other hand, strongly agreed, or agreed to a greater extent that journalists are competent at their job.

Journalists’ biggest bugbear, it seems, is that PRs don’t spend enough time getting to know the publications they’re pitching to, which annoys them because they have to spend time dealing with irrelevant emails and calls.

“Many never read the papers so are not pitching correctly,” wrote one journalist, while another commented: “I receive a fair amount of calls from PRs who have no idea what the magazine and website I work on are about.”

From my experience working on a daily regional newspaper, I can relate to this. I cannot recall the amount of times I was emailed/called to ask whether I’d be interested in a story that had absolutely nothing to do with the paper’s circulation area. It’s a waste of everyone’s time which could have been avoided with a couple of minutes’ research…

The survey points out that while PRs were generally kinder about their counterparts’ abilities, they think some journalists are better at their job than others. One talked about “unqualified reporters churning out inaccurate copy”, while another pointed out budgets cut in the industry, resulting in a “lack of resource and time, with not enough staff.” Yes it’s true that some journalists aren’t up to the mark – this is the case in any job – and as for the point about the cutbacks, I’m afraid it’s a sad reminder of the times.

Due to the well-known challenges facing the journalism industry today, I think PRs are sympathetic to the pressures their counterparts are facing. This was reflected in the survey, with more than 80 per cent of PRs either strongly agreeing, or agreeing to a greater extent, that journalists have a difficult job.

Only 52 per cent of journalists felt the same about about public relations, which wasn’t a surprise, but it is disappointing to read. There seems to be this stigma that PRs just sit around all day, and have no urgency or understanding of deadlines. Here’s where I (reluctantly) admit that I used to have that opinion – to a certain extent – and wondered just how hard it could be to get a quote signed off by a client. Six hours later still no sign of the quote…

Now, my eyes have been opened; PR is no easy feat. I am just as busy on a day-to-day basis as I was as a journalist, and my clients are busy too! If I can’t get you a quote, or a feature by your deadline, it’s for a genuine reason (i.e. I can’t get hold of the client or there are multiple people/companies that need to sign something off) – not because I can’t be bothered to do my job.

Journalists don’t think they’re paid an appropriate amount for the work they do (this is no secret!), but they are pretty satisfied with their jobs. This isn’t surprising to me, journalism is an extremely rewarding career, as is PR, and for the very same reason. Let me explain: One of my very first stories I wrote as a trainee reporter was about a church that needed to raise a certain amount of money for repairs. A few days after the story went live, the vicar thanked me because the publicity it raised helped the church reach its target. Feeling like you’ve made a real difference is a feeling like no other, and that’s the very thing I love about PR too. I’m helping my clients shout about their fantastic products and services, and that’s making an impact on their awareness, their sales, and ultimately their growth.

What did surprise me however, was this: 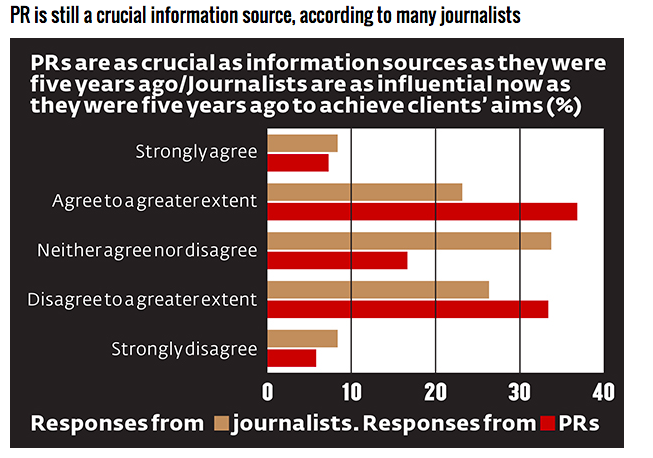 Ideally, I’d like to have seen both journalist and PRs strongly agreeing to this question, or agreeing to a greater extent, and I can’t help think there’s a certain amount of stubbornness involved here.

One journalist, who agreed that PRs are becoming more crucial, said it’s because newsrooms are are “far shorter on staff than they were five years ago”. It’s true that journalists struggle for time to get out of the office and find their own stories (like they used to), and as such it means they’re becoming more and more dependent on submitted news from individuals, businesses or PRs.

However, this doesn’t mean that PRs can rely on this in order to get their press release covered – journalists should always choose quality over quantity and PRs should always ensure they’re sending news/feature-worthy content.

The fourth and final installment was all about personality and character traits. So what do journalists like about PRs? “Literally nothing,” according to one! Fortunately, others were much more spirited in their response, praising their counterparts for their “positive attitude and politeness”.

As for PRs? They admired the fact that journalists are determined to tell the truth, but branded them rude, abrupt and arrogant at times. One PR really hit the nail on the head: “I think the things people dislike about journalists – being rude/grumpy – are a result of crap PRs pitching irrelevant ideas. We’re creators of our own downfall sometimes.” Some, however, are just plain grumpy!

It feels as though we’re enemies at times, but the truth is we probably wouldn’t be able to survive without each other. I read an article once that said if journalists and PRs were in a Facebook relationship, it’d be described as ‘it’s complicated’, which is true – but it doesn’t have to be. It seems fitting then that I share some of my top tips on how PRs can get on a journalist’s good side:

Take time to get to know the publication you’re targeting

This was touched upon in the survey, but is worth reiterating. Whether you’re looking to pitch your client’s story to a local news site or one of the biggest nationals – get to know the publication first. Get a feel for the type of content and sections they feature and try to imagine where your story would fit in. Some websites suggest sending editorial ideas/press releases to general news@ email addresses, but always try to find contact details for a specific journalist where possible.

Keep it short and sweet

Deciding on the best time to call or email a journalist depends on how frequent their news gets published. From my own experience on a daily regional newspaper, morning (after the first cup of coffee) is always best.

Many journalists will say that they hate being called by PRs, and I understand why. But if you’re intent on calling – keep it short. Introduce yourself and the business you’re from and give a quick overview of the story you want to shout to the world about. They’ll probably do one of three things:

Don’t get disheartened if it’s the latter and don’t let it put you off getting in touch again in the future. It may be that that particular idea wasn’t ‘newsworthy’ enough to be considered.

If you’re emailing, skip the niceties and get to the details. Well-written press release are welcome (but how to write a good one is a whole different blog post!). High quality photographs and videos are also appreciated.

So how do you make sure your content is ‘newsworthy’? A lot of this comes back to point one, making sure your news or feature idea is appropriate for the publication you’re targeting and its audience. Common sense should prevail here – you’re not going to get a story about your client’s growth in the beauty sector on a food manufacturing news site, for example. Taking local business news as one example, good stories would include:

– The launch of a new business

If a journalist has used your story, then send them a quick thank you email and say that you’ll get in touch with any other (relevant) news in the future. Not a necessity, but one which will be appreciated and keep you on their mind.

I’d love to hear your top tips on how to forge better relationships with journalists. Leave us a comment below and let us know!