The talk started with Gavin asking for a show of hands from the audience: “Who of you watches video?”. Nearly the entire room raises their hands, and then he asks “but who of you can honestly say they create content on a regular basis?” As nearly the whole room lowers their hands, this question provides the framework for Gavin Bells’ talk where he addressed the question of how marketers can make the most out of video content on Facebook. He began by addressing the issue of reluctance to begin creating video content because of the potential cost weighed against unknown results. However, he made the point that the only way to begin creating great video content is to start making content regularly. Then, through building quality videos organically, advertisers can pick the best performing videos in terms of likes, watch time and comments to take forward in advertising.

Gavin outlined his personal story of how he helped his client, who provided guitar lesson, utilise video content in Facebook ads to help drive not only brand awareness, but also sales. Within this story Gavin outlined a three-step approach which he took when approaching sponsored video content for his client which could also be applied to all Facebook video ad strategies:

Upload regular video content. From this, they chose videos with the highest average number of watch time combined with number of likes and comments. They would then use this as the content to show to a wider audience in the sponsored content format for Facebook.

Consider who the wider audience for your video should be. In Gavin’s example, he stated that they refined their audience into users who were interested in Guitars and learning how to play and this formed the base of their Facebook audience. They would then break this audience down based on performance and apply more budget to audiences with better overall performance (i.e the longest average watch time).

Described as the golden nugget in this strategy, the third step in the approach was to re-market to users who had watched the videos with ads. In the examples he gave, these ads contained a promotional offer of ‘a 14 day free trial’ which aimed to turn those qualified video users into buyers. This strategy was met with great success for his client, achieving an average of $17 cost-per-sale on which they made and average of $170 revenue.

Gavin delivered a clean, clear and result driven talk which perfectly showcased the power of video in not only the advertising sphere of Facebook, but also organic. With a solid strategy for video ads on Facebook the case study given by Gavin proved that video content can be accessible and successful for many brands and put into the perspective the power of video and its role in generating sales. 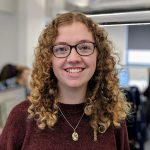 A recent Nottingham graduate who is in training within the PPC team. Originally from the Welsh valleys and love nothing more than to curl up with a good book and a good ol' cuppa tea.

A recent Nottingham graduate who is in training within the PPC team. Originally from the Welsh valleys and love nothing more than to curl up with a good book and a good ol' cuppa tea.